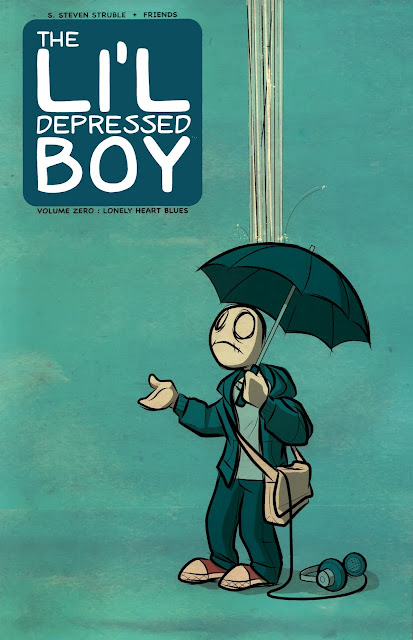 S. Steven Struble’s The Li’l Depressed Boy started life in the mind of a junior high student hoping to get the attention of a girl and from there, over the years, transformed to a webcomic and eventually to a full fledged comic book put out my current favorite publisher, Image. It is not your average every day comic and there’s no-one with superpowers gracing the pages. There’s not really any villains to speak of unless, like me, you count life itself as a villain. Drawn in blue by myriad artists: Ed Tadem, Lindsay Jane, Sina Grace, Jose Garibaldi, Chris Fenoglio, Zach Trover, Kristopher Struble, Jim Mahfood, Kanila Tripp, Roman Muradov, Justin Stewart, Sam Kieth, Jim Valentino, Scott Morse, Evan DiLeo, and Jamie McKelvie for starters. If you “get it,” then there is no explanation necessary and if you don’t, then you probably never will no matter how much explaining could be done. It’s one of those stories. As a series, The Li’l Depressed Boy is the best comic on the shelves today bar none. For those of us who “get it,” and I know for a fact there are some out there that don’t, it will hit home in ways that you don’t expect from a comic. If you, like me, fall in to the crowd that “gets it” you will find yourself picking up every issue just to get current.

Lonely Heart Blues, the graphic novel this post is about, is the very beginning. Struble really bares his soul in this book and we are better for him having written it. He is sparse with words but the words he does choose are quite simply, genius. 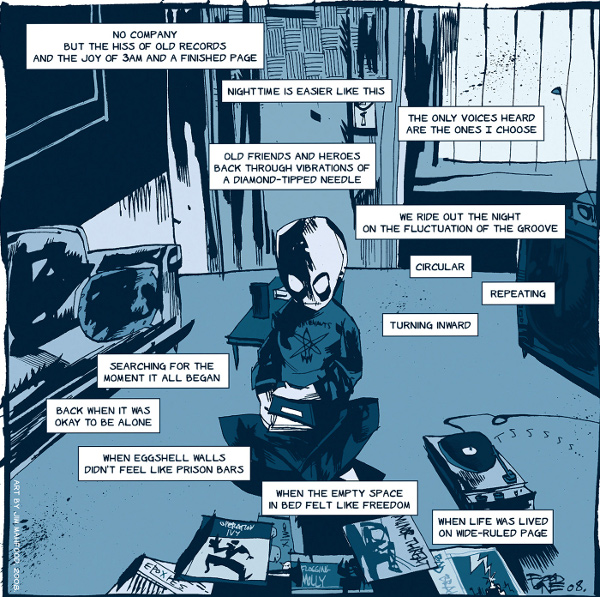 This story is told through the panels as much if not more than through the writing. Now, one could argue that this is true of many comic books, but I would retort that Struble takes it to a completely different level. If you can let yourself get truly lost in the art then you will really understand LDB and his world. Every artist who worked on this book is amazing, in my lowly opinion, and therein may lie the secret of why this is even better than the monthly. You get to see so many different incarnations of LDB through the eyes of the artists who drew him. Every one of the artists add something to the character that is carried through in the mind of the reader right in to the next artist’s take. The journey is just amazing.

Now you may ask yourself, “how does a comic about a sad little rag doll boy appeal to anyone?” I would simply tell you that some of us have lived this story. 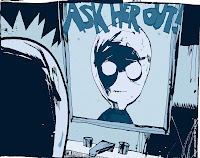 Some of us have been that rag doll. I love comics the same way I love music. I escape into both of them and do so with a passion. The Li’l Depressed boy is me about 20 years ago. Before the kids, before the first wife, alone with my music. I was alone no matter how many people are around me. Not lonely necessarily, but alone. I was trying to figure it all out and getting it wrong more often than not. Not knowing the right words to say, not knowing at all. Struble really hits the bone with this one. For me, at least, he is telling my past in way that I could not have. I wish I could go back in time and just hand certain pages to certain people instead of not saying the things I didn’t say. So if you were that guy or girl that never had the words, that let your fear paralyze you, that never quite got it right, then this is your book. It is your story. It is our story. If not then maybe you ought to wait for Scott’s next post to pick your next book. As for me I am about to strap on my headphones, turn up the music, and lose myself for a little while.

Previous: The New 52 (Now “Newer” Than Ever)
Next: Top 5 Comic Characters That I Would Like To Hang Out