The Return Of The Dapper Men

Welcome to Comical-Musings, your source for suggestions on good excellent comics.  We at The Writer’s Blok strive to bring you lots oodles of new content as often as possible and to interest enlighten you to new series that you may not have read or ever even heard of.  One of the comics that should not be a surprise to you is The Return of The Dapper Men by Jim McCann and illustrated by Janet Lee.  The reason that you should not be surprised that I am recommending it is because it is very good awesome in scope and execution.  It won the Eisner (Academy Award of comic books) for “best graphic novel,” this year!  The story is sweet and the art is breathtaking.  The Return of The Dapper Men is the perfect collision of “really cool people, who are really good at what they do, doing something that fits them.”  Jim McCann’s fairy tale writing lends itself to Janet Lee’s whimsical cuteness to her art and that is not even half of why you’ll like it. 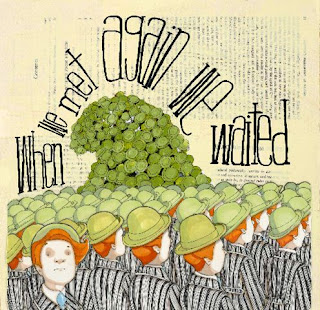 Well, there you go.  There was a great deal of work that went into crafting Return of The Dapper Men to where when I hold this book (that’s what it is, with a little red ribbon bookmark) I can’t help, but feel like I have something valuable in my hands.  This work fires on three cylinders, we already gushed about production values, let’s move on to story.

Jim McCann is best known to readers of this blog for his extensive work on the Hawkeye and Mockingbird properties.  He brought big vibrant stories, but somehow kept them grounded.  The relationships were strong and the action intense.  I would never have guessed that when placed into the role of fairy godmother for an entire world of his own creation, he would flourish the way that he did.  The fairy-tale writing of the book when mixed with the strong prose made it feel terribly important.  The story that I was reading echoed other stories in my head and made my very comfortable and very interested in every little word placed in every speech bubble.  The flowery poetic language sets the stage for a delightful all ages book that everyone from over the hill comic book geeks to little girls can connect with and enjoy.  It is sweet and intelligent.  I enjoyed it much.

The third cylinder is Janet Lee’s art.  It is simply breathtaking.  A little known fact about the Return of The Dapper Men is that the whole thing was inspired by Jim writing a story around two art pieces in Janet’s home.  Out of a painted door and a small canvas, an entire world sprang to life.  This is to be expected by how intricately and masterfully crafted that art truly is.  Janet painstakingly builds her art and the amount of work that goes in to one page is astounding.  Here is a video from Archaia about how Janet makes one page of a Dapper Men Book.

If you watched the video, there is no doubting Janet’s commitment to her art form.  Jim and Janet’s attitudes suggest that for them, it’s not about meeting deadlines and making jetplane money.  It seems to be two artists collaboratively making something beautiful.  That honesty drives it into your mind, hands, and eventually your heart.

This is a glowing review of a book that impressed me.  In today’s society, we don’t often feel anything.  We just cruise along our daily lives and make due.  The Return of The Dapper Men made me feel something.  I haven’t figured out what yet, but that is a powerful reaction to elicit from a “comic book.”  I got mine used at Half Price Books for $10, but you can find it on Instocktrades.com for $18.71.  Many people have snarky looks on their faces when they say “comic books are for kids!”  This one could be, but it also could touch your heart.  I recommend it highly.