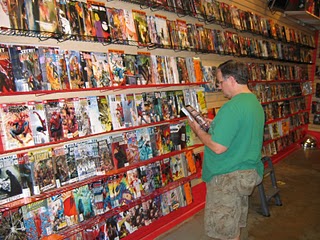 Welcome back to Comical-Musings, your friend in the wide world of comic books.  Tomorrow is the day ladies and gents!  Tomorrow is the day that I, Scott Deaux, descend back into purchasing a comic book issue or two monthly.  This sounds crazy, I know.  “Why wouldn’t you wait for 6 months and by the trade paperback” you would say and you would be echoing the sales practices of the majority of comic book readers.  The thing is that Diamond (the distributors) still believe weekly issues work and evaluate what trade trade paperbacks to collect by what sells in weekly issues.  I constantly talk about “supporting the industry” with this blog, but tomorrow I put my money where my mouth is.  Tomorrow I am going to support the industry the way that it thinks works.  I’m not going to the library, Barnes and Noble, or Instocktrades.com.  I am going to buy one or two issues ($6) at my local comic book store and then wait for a month to see what happens next.  This flies in the face of all that our ADD-riddled society holds dear, but I am going to do it.  I’m going to feel anticipation in comics for the first time in a while.  I am going to try something new and something DC for that matter.

You may recall my post about DC rebooting their universe from last week.  If not, the brief synopsis is that DC comics (Superman, Batman, Wonder Woman) is starting over all of their comic books at #1 and mixing things up across the board.  I like new stuff and I like some of the weird changes being made, so I am going to wade into the water.  Tomorrow, I am purchasing two books: Justice League International number one and Stormwatch number one. 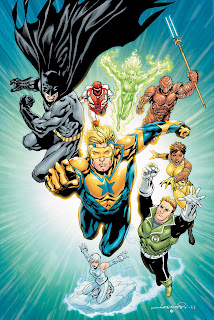 First, I am not ashamed to say that Justice League International has my attention for the dumbest reason ever.  The Justice League International books have always been famous for having interesting team dynamics with unexpected characters working alongside stalwarts, but the line up of the new team flew in the face of reason.  I’m talking about the inclusion of August General In Iron.  You may remember him from my previous post where I discussed the Great Ten, Chinese superheroes with awkward names.  He is the leader of a force that has such heroes as Accomplished Perfect Physician and Immortal Man In Darkness.  Now, he is on the Justice League International.  The team dynamic of seeing how an even-keeled, communist, Chinese superpower works with brash, American, everyman Guy Gardner should be amazing if done right.  I may disappointed by this one, but can’t withstand giving it a try. 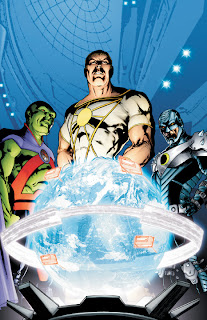 Second, Stormwatch is the front runner for favoritism in the New 52.  I loved Warren Ellis’ “The Authority” in it’s first volume in the Wildstorm (a shoot off company of DC) Universe.  They were deconstructed superheroes with incredibly weird powers and relationships against unstoppable foes.  It was like poetry in motion and I became enamored with the Authority’s “different” kind of superhero.  Then, Wildstorm decided to make maturity a point to hang their hat on and things got violent and sexual and I don’t fool with nudity or sex in comics much like I do not in real life (extra-maritally) so I dropped it like a bad habit and lost touch with my weird, wonderful new friends.  Well…now the Authority is playing in the DC pool.  That means that they need to play by DC’s “mainstream” rules.  It feels like if the R-rated action movie that I really wanted to see in theaters with all of the nudity and sex scenes is now coming onto ABC and will be edited for content.  I am so excited about this series.  They are also adding the Martian Manhunter to the mix and that means that a B- or C+ character in the DC universe is getting a new team to work with.  It has the makings of greatness.

Anyways, I will let all of you know how they are with reviews monthly.  It feels like Christmas all over again and I hope I can sleep tonight!!! (Is 5 hours really sleep?)  I am hoping for big things.  If you get any of the New 52 and wanna talk about it, let me know what you think in the comments!  Read on, intrepid readers!

2011-09-06
Scott Deaux
Previous: What if Iron Man had REALLY been a Traitor, Really?
Next: What If Conan The Barbarian Were Stranded In The 20th Century