“Hi” to all of our readers and thank you for checking out The Single Issue Adventure at Comical-Musings.  If you have been reading our posts recently, then you probably know that I am trying something new in my comic reading.  I am purchasing single issue comics monthly, not reading trades at Barnes and Noble or at the library or buying trades from Instocktrades.com or Half Price Books or TFAW.com.  The Single Issue Adventure has begun and where better to begin than issue number one.  I chose to replace the somewhat underwhelming series of Justice League International with an outside the box pick of Resurrection Man.  Ifanboy.com liked it, but what did I think?

I am happy to report that The Resurrection Man was good.  Good enough to keep and share about anyways.  The concept is catchy and the plot mysterious.  I found it to be engaging and forgiving of my lack of any previous knowledge about the character of Mitch Shelley, The Resurrection Man. 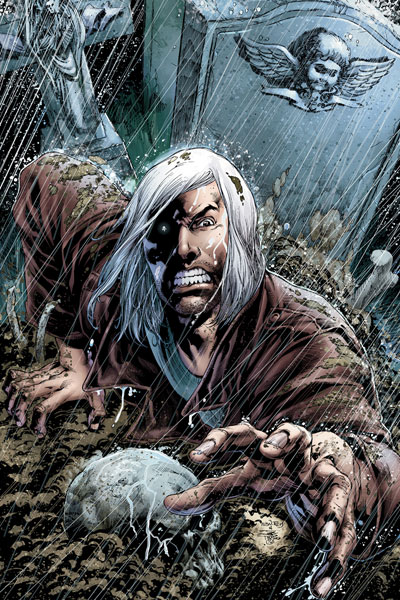 We find Mitch dead as a door nail to begin our story, but soon he awakes with the taste of metal in his mouth and unknown power at his fingertips.  This may seem odd to us, but this is how Mitch does it.  He dies for a matter of minutes/seconds and comes back to life with a new superpower.  Previously, Mitch’s new power was influenced by how he died previously, but that does not seem to hold true in The New 52.  The Resurrection Man has goals to accomplish and random powers to use after each death.  If that doesn’t whet your appetite to check this comic out, add in the supernatural side of things.
Some people with red face tattoos want to kill Mitch for good.  It is somewhat surprising that by the end of the issue, we find out that these are angels looking to claim Mitch’s soul for Heaven.  It is “overdue,” they say.  The side of light seems to have secret agents everywhere and what’s more surprising is that the “basement” division, which you have to assume is hell, wants Mitch too.  So we have the angelic and demonic forces of good and evil hunting for one man who cannot die and cycles through odd powers.  Now, you should be sold.
This comic book was refreshing to me.  The fact that we get no spandex and a rich story with deeply fictional religious themes is surprising from a book that hasn’t been published since 1997-1999.  Abnett and Lanning (writers famous for updating ridiculous conceptual characters like the Marvel Cosmic Universe) seem to be hitting stride with Resurrection Man, and we are only at issue number one.  And why wouldn’t they, they are his original creators.  That makes this even cooler.  These writers get a second chance at a character that they created over ten years ago, but now find themselves armed with enhanced skill and perspective.  It should not disappoint.  As long as they don’t get too blasphemous with the religion and keep their views fictional, this comic book will be replacing Justice League International in The Single Issue Adventure from now on.  Drop $2.99 at your local comic book store and let me know what you think in the comments section.