The Tick Turns 100 And Meets Invincible 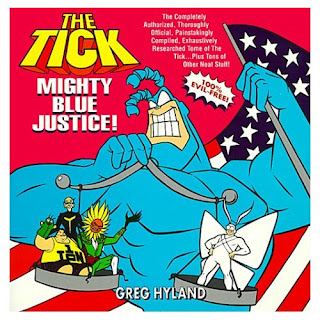 Happy Tuesday to all.  I am happy to review something today that I feel is clever, well-done, and un-abashedly funny.  The Tick is a character that I have a long standing history with.  I watched the cartoon shows casually as a child then more devotedly as a teenager when they would air late at night on Comedy Central.  The complete immersion into The Tick came to me when I purchased a book at Barnes and Noble called “The Tick: Mighty Blue Justice.”  This encyclopedia on all things Tick explained and re-introduced jokes that had gone over my head at a younger age.  As an older person, I was able to draw obvious parallels between mainstream characters and The Tick’s offbeat cast.  It was eye-opening, but sadly would not last.  On my way to college, I lost a decent amount of my innocence and opted for the inane fart and wiener jokes that Kevin Smith had to offer.  The Tick fell by the wayside and when I dove into comics headfirst in college, the Tick was an afterthought.  I’m happy to tell you that I have found that same appreciation again thanks to a little magic.

This magic that I speak of is “The Tick #100.”  It caught my eye because it featured another one of my favorite characters, Invincible.  We have spoken often on Comical-Musings about how much I love Invincible and so it was nice to see him team up with a character from my childhood.  The characters intertwine nicely and the numerous jokes that they make are really celebrations of each character.  They lovingly mock the simplicity of The Tick and the stylistic similarities between Invincible stories with respect and care.  The issue was a clever little departure from my regular comics that I read and it made me laugh a little bit.  The “Fat Rabbit” gag was a nice touch for those who are familiar with The Tick. 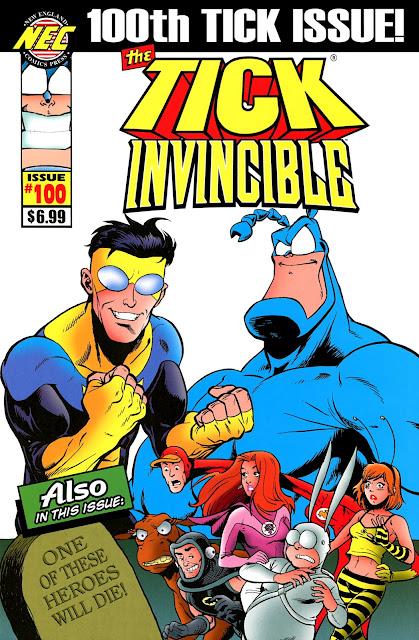 In the end, it was a team up between two characters that I love; One from my past and one from the present.  The story was humorous and I felt satisfied with the end.  As an aside, one thing that many comic books struggle to do is to provide decent jumping on points for the new reader.  The Tick #100 practically lays out a red carpet with 10+ pages of back matter explaining the entire published history of The Tick.  It tells you what to read and where to get it.  So as far as being a crossover with a successful character from now with a forgotten character from the 90s, that provides a boost in sales and a great jumping on point, The Tick #100 was extremely successful.  You can pick any and all of The Tick catalog up at New England Comics’ website.  At $6.99, Issue #100 is a little bit pricey in comparison to mainstream titles, but you pay for quality and this is worth it.  If you liked The Tick before, give this one a read!

Previous: Grim Leaper
Next: Two Truths and a Lie: Thor Will Meet Us In The Air…