The Top 5 Comic Characters Who are Both Fast and Furious

Here at Comical-Musings we strive to keep you up to date on current events.  You could justifiably hold us in contempt if we failed to do so.  This month we’re exercising some executive privilege to bring you a top five list that could not be covered up.  Ripped straight from the headlines, we proudly present The Top 5 Comic Characters who are Fast and Furious.

Mongooses (mongeese?) are furious and ferocious animals.  So when Robert Frank was given a transfusion of Mongoose blood to cure a cobra bite (Caution: This does not work!) we can only hope that he inherited some of the mongoose’s fury as he gained the power of super speed.  (Then again, mongooses don’t have super speed, so whatever.)  Anyway, he probably has some pent-up anger, even if it is self-directed.  After all, he chose to call himself “The Whizzer” and then picked a costume that is mostly yellow… I’ll bet a few derisive comments have leaked out from people around him.  And nothing can make a person angry like a paternity suit.  At one time he was believed to be the father of Quicksilver (who appears later in this list).  It would only take a few unnecessary child support payments to make The Whizzer pissed.

Technically, all members of the “Super” family (Superman, Supergirl, Krypto the Superdog) have super speed.  And most of them tend to be fairly even-tempered; but not Superboy Prime.  As the second string version of an unnecessary Superman copy, Prime tends to be a little grumpy.  It probably didn’t help that he witnessed the destruction of his home universe.  But it’s not until he punches reality, kills several other heroes, and brings about the events of Infinite Crisis that he finally gets his “Super” status revoked.  No worries; he just carves an ‘S’ on his own bare chest.  His inclusion on this list is ironic because he has developed a fear of other speedsters, ever since he was trapped in the Speed Force.  Thus, he is the only know sufferer of Anthrohypertachophobia. 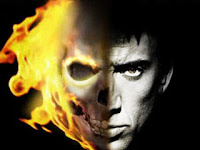 The Ghost Rider’s motorcycle is fueled by hell fire, so it is not only fast, but it also gets great gas mileage.  And Johnny has the right to be furious.  He trades his soul to save his stepfather from dying of cancer, and his stepfather dies in a failed motorcycle stunt shortly thereafter.  So, reeking of brimstone, Johnny fights demons and eventually liberates his soul; then he goes to hell anyway.  But what really melts the flesh off his skull is the fact that he has been portrayed by Nicholas Cage in two of the worst movies ever made.  And if you think he is mad now, just wait until he hears that Cage will reprise his role as Ghost Rider when he completes two trilogies at once in National Treasure 3: The Curse of Nixon’s Harley. 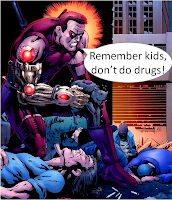 Raised by a Navajo medicine chief named Brave Bow, Roy was a faster archer than his mentor the Oliver Queen.  He fought crime alongside the Green Arrow and was a member of the original Teen Titans, but his superhero name “Speedy” proved to be prophetic, because he began to experiment with drugs.  He eventually became addicted to heroin.  There are few things more furious than a junkie looking to score, and Roy proved it when he beat several homeless people to death using a dead cat.  Fortunately, bath salts were not involved.  Unfortunately, Roy has discovered that rehab and withdrawals are never speedy.  In seriousness, Roy’s addiction was groundbreaking, and his struggles have helped to introduce many young readers to the nightmare and tragedy of drug use.

Imagine that your father is one of the world’s most powerful mutants, and has organized and led some of the most prominent mutant teams in the Marvel Universe.  Your twin sister was born with the ability to alter reality, but all you inherited was super speed and your father’s prematurely gray hair.  Perhaps you can understand some of Quicksilver’s frustration.  Living in the shadow of Magneto, perhaps he wishes that The Whizzer really was his father.  Quicksilver has been featured in a previous Top 5 for vibrating someone to death; he is not a happy person.  Perhaps his fury contributed to the graying of his quaff, but it probably doesn’t help that his name calls attention to it.  Trapped in a world that crawls at a snail’s pace, Quicksilver can get furious faster than anyone. 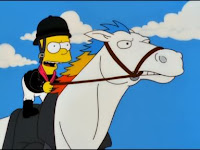 Honorable mention goes to Duncan the diving horse from the Simpsons television show.  He never appeared in any Simpsons comic book, so he was ineligible for this list.  But in the episode hilariously titled “Saddlesore Galactica” Homer and Bart rescue Duncan from a carnival, rename him Furious D, and train him to be a race horse.  Duncan, you truly are fast and furious.

Previous: O-Bane-ma-care and the Individual Bat-Mandate
Next: Before America’s Got Powers There Was WildGuard: Casting Call