The Wolves In The Walls

As many of you may have read previously, Comical-Musings is now being taken over by the authorship group of The Writer’s Blok.  These 5 like-minded individuals will be partnering with me, Scott Deaux as the editor-in-chief to bring you larger quantities of content, greater quality content, and different viewpoints that allow the blog to become something greater than just my singular thoughts and knowledge about things.  We are happy that today we get to showcase the first post written on Comical-Musings by Aberdeen.  Aberdeen is probably my best friend and has previously been involved in the art world in the form of college art school and minor gallery and commission work.  Even more than the stories in comics, Aberdeen finds interest in unique perspectives artistically.  The viewpoint that Aberdeen brings is fresh and not afraid to try new things or be a little creeped out.  Know that you will never be bored with an Aberdeen post.  The Writer’s Blok is in full swing and will be pumping out content just as fast as possible, so make sure you keep your eyes peeled as we are debuting our new authors in this month of “Independents.”

As far as comic writers go, no one can capture the lustful violence of a focus group of sweaty serial killers crammed into a Marriott-looking conference room like Neil Gaiman.  With a credit like that to your name, where do you go next?  How do you delve deeper into the depravity and emptiness of humanity?  The answer is obvious my friends, write a children’s book.  And that is exactly what Neil Gaiman did with his New York Times best seller, “The Wolves in the Walls.” 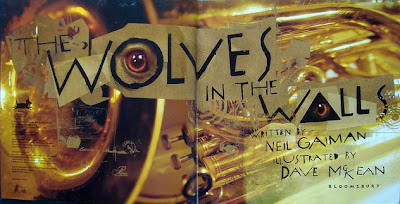 I was given this book as a gift years ago, when children were nothing, but a distant concept.  When I turned the pages, I was bombarded with images of my future children clad in ragged Chuck Taylor’s, wearing some obscure comic book t-shirt; toting a “blanky” and asking me to read him his favorite bedtime story about the wolves.  “I will have the coolest kid.”  Five years later, I lovingly pull the untouched copy off of my child’s shelf.  He sits obliviously in the corner in a t-shirt marketing whatever Pixar movie is out this week, laughing hysterically as Elmo dances across the TV screen.  Hmmm….  News flash, as many times as you say “my kid won’t like Elmo,” it still will happen.  I swear that red mop is like crack for the three and under crowd.  Oh well!  I open the book and see the deliciously off-putting and unsettling art of Dave McKean (illustrator of Arkham Asylum) and realize that this remains one of my favorite books ever.

The Wolves in the Walls chronicles the happenings of a little girl named Lucy as her family is uprooted from their home by a pack of wolves.  The book opens with a “Boy Who Cried Wolf” homage as Lucy desperately tries to convince her family that there are wolves in the walls.  Her parents dismiss her terrified pleas as the overactive imagination of a child.  Lucy lays in bed all night long, gripping her “pig-puppet” and listening to the scratching of the wolves.  You can’t help, but conjure remembrances of the story of “The Three Little Pigs” as you see sweet little pig-puppet cuddled in Lucy’s arms.  Come on folks, this is a story about big…bad….wolves!  Let’s be honest, that pig is screwed. 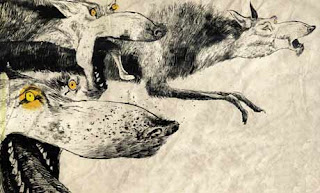 The book quickly takes on an apocalyptic feel as the family is driven from their house by the pack of wolves.  Desperation drips off the pages as they sadly sit, huddled around the fire, throwing out ideas of where they could go to get away.  All the while, they watch the wolves run-a-muck in their house.
I don’t want to reveal much more of the plot because I sincerely want everyone to read this book, but with that being said…as a children’s publication, this book has it all.  A child like them as the heroine, wolves, and large emotive prints.  It is sprinkled with all of those moments designed to pry the giggles out of your little ones, like wolves wearing socks and eating jam, or a dad running frantically and awkwardly entwined in a tuba.  But, as literature for an adult, it takes on a whole new face.  It leads you through all of the emotions of experiencing a tragedy.  The fear, the desperation, the helplessness, and finally the moment that any good comic, novel, or movie needs, the shift in the soul of a protagonist.  The moment that something is ignited, simply…the will to fight.

Dave McKean creates a haunting scene for all of this to unravel in. 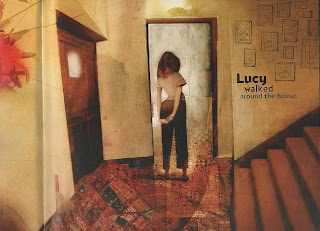 His mixed-media illustrations will send shivers up your spine.  When combined with the compelling story of Neil Gaiman, you are left with a children’s book that would entertain any child and frighten any adult to the core.

You can purchase this book on Amazon.com or Barnes and Noble.
You can thank Neil Gaiman on Twitter @Neilhimself

Previous: Why You Like Comics, and Why You Will Like the Flaming Carrot
Next: How To Battle Having A Case Of The Mondays