So, I have decided to stop welcoming you to Comical-Musings whenever you arrive and instead just jump into the selected content for the day from now on.  All that being said, welcome to Comical-Musings.  Today, we deal with another sticky time travel story.  In my opinion, this one is much better than the previous offering, but much more difficult to explain.  I am going to try to review this book/sell you on why you should check it out, so here we go. 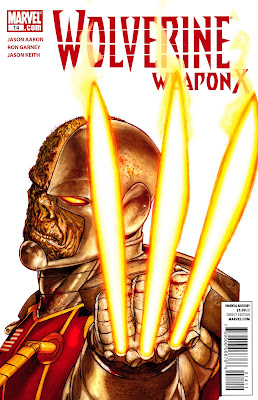 Jason Aaron is a good writer.  We have referenced his Wolverine work time and time again, most recently here.  This book has a great beginning and that’s what I think many modern day comic books are lacking…a hook.  Wolverine: Tomorrow Dies Today opens with an introduction to a young man who explains how he has trained for years and sold what he had and given up everything to become this fledgling superhero as he leaps around a commonplace “back alley.”  Now, I am known for oft being surprised by things, but when a Deathlok walks out of nowhere and shoots the young superhero and decapitates him, I was taken aback.  By using the four pages of introduction with this character, Aaron had me spun.  I was already thinking about how good his team up with Wolverine would be, wondering whether they would fight first, thinking about whether adamantium could pierce his rock skin and then in just a few panels, he is dead.  The Deathlok picks up his head, looks at it, and then throws it in a trash can, coldly walking off to his next target.  That is a killer way to start an engrossing story. 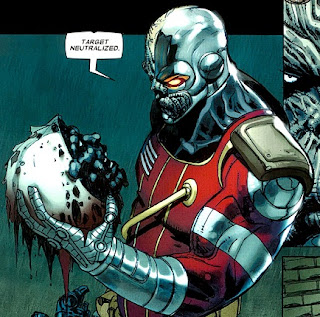 As we flip through the pages, we find that these Deathloks are created by the evil Roxxon corporation in the future and set back in time to wipe out problematic superheroes before they have a chance to ruin their evil plans in the future.  There is a team of these Deathloks walking around killing young people and babies.  It is frightening.  The Deathlok is a zombie cyborg soldier created by Marvel Comics writers Rich Buckler and Doug Moench in 1974.  Much of it’s body is metal and robotic, hence cyborg.  The most famous Deathlok historically was Luther Manning, but this story isn’t about one specific Deathlok, rather an army of them killing the future in the past.

Add to all of this, the fact that the resistance in the future has contacted the youthful version of it’s commander using telepathic communication (we’ll let “how” they did that be a fun surprise for you) across time and we have ourselves a time war.  There are many characters, such as the avengers, featured doing anything they can to stop the future evils that are fated to them.  People in the past do something crazy and it alters the future.  People in the future make calculated moves to alter the past.  Your head begins to hurt, but in a good way and by the time all is said and done, it is a very enjoyable experience.  So enjoyable in fact, that I think that this is my favorite Jason Aaron Wolverine story of all.  If you want to check this out and make it your favorite Jason Aaron Wolverine story, you can get the hardcover edition at Instocktrades for $15.49.  Until next time, keep reading.

2011-10-26
Tim Jenkins
Previous: Ultimate Adventures
Next: Just In Time For The Holidays…Morbius