In the social circles in which I run, I am widely known as a “talker” or at the very least, someone with a lot to say.  Sometimes a quip, a humorous story, an occasional nugget of wisdom…rarely do I have little or nothing to say.  There are some stories in comic books, however, that I have nothing to say other than “dude…it’s just sooo good.”  Even though I love these books, when I try to write something for the blog about it, the sentiments that keep repeating in my head are simple and very positive.  I thought for April’s Top 5 list, we would do the Top 5 Comic Book Stories That Left Me Speechless.

This comic book, with story by Frank Miller and art by Klaus Janzen, literally re-defined Batman.  Many people see this comic book from 1986 as the basis of all modern day Batman tales.  It’s a gritty and emotional tale of an elder Bruce Wayne fighting injustice and anyone who knows about comic books considers it a classic.  Your library might not have a very good graphic novels section, but they will have The Dark Knight Returns kicking around somewhere.  Comic media publications have devoted hour long video shows and countless hours talking about how this single series changed the game, so I am not sure what else I have to say about it.  It was good.  I liked it.  You should read it.

We3 is a violent story about war, technology, and the inalienable goodness found in the simple nature of animals.  Grant Morrison teams with Frank Quitely to deliver a visually stunning masterpiece.  The lab-tested, robot-infused, animals romp through the wilderness and you the reader can feel their freedom.  I found that for not having a lot of prose, this comic book tells an amazing story with likable characters.  The book is a fantastic read and the art will certainly captivate anyone who picks it up.  Quitely’s art style is very realistic and kinetic and action scenes are blurred for effect.  It’s a really positive reading experience.  By the end of it, you will see that although it’s a science-fiction robot story, it has a lot of heart.

Based on the hit series of books by Stephen King, The Dark Tower proves that licensed properties don’t have to be doomed to fail.  The story follows what I would describe as “Cowboy-Knights” through adventures both supernatural and very real.  The story is written mostly by Peter David with art by Jae Lee and Richard Isanov.  Whenever I pick up a Dark Tower book, I cannot put it down.  I can honestly say, as a person who writes about comic books all of the time, that two of the most gut-wrenching moments that I have ever seen in the comic book medium happen in the first couple of stories in The Dark Tower.  It’s ghostly and scary and fun and romantic and very entertaining.  There are a lot of downer parts to it, so don’t read it if you’re clinically depressed or anything, but everyone knows tragedy is the gasoline for good writing.  I would highly recommend checking out the hardcover editions of these books.

The Nobody is Jeff Lemire’s modern “Invisible Man” story.  It is all the more impressive that he wrote the graphic novel and did all of the artwork himself.  The Nobody is not regarded as highly in comic book circles as others on this list, but to me, it hit a lot of notes.  First off, I really enjoyed Lemire’s art style and some of the angles that he takes on rather mundane shots elevate this book to art form status for me.  I think that there character designs provide stark realism in this weird cartoony world and that every step The Nobody takes is appropriate.  We get a little humor mixed with a lot of personality and it brings the sleepy little town in the story to life.  You root for The Nobody, but in the end, you find yourself worried that perhaps, you were rooting for the wrong guy.  It is a very satisfying snapshot into the life of someone dealing with an extraordinary circumstance.  You should read it. 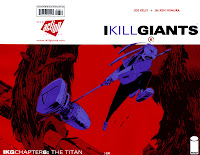 The number one book on our list is I Kill Giants.  This comic book emotionally touched me, on a personal level, very deeply.  Everyone that I have recommended this book to has come to me after reading it and said “It was so good…I totally cried.”  To me, that is not unexpected as the near thought of this book can conjure a tear down my face.  Joe Kelly and Ken Nimura tell a tale that is very entertaining and I feel comfortable using the word “gripping” to describe the tension within it’s pages.  The story-telling is done intelligently and you learn slowly what’s going on and the comic book makes you feel like you could be one of Barbara Thorson’s friends looking in on her life.  This comic book is not just “one you should read,” if you enjoy literature, you HAVE TO read it.  It’s genius.

So, you ask yourself “how am I supposed to get all of these great comic books?”  Well, here’s your answer with links to the cheapest/best collections of them that I could find.  Happy reading to you, and with this list more than ever, I am sure that it will be.

Tagged with: AMAZING Dark Tower I Kill Giants The Dark Knight Returns The Nobody top 5 We3

Previous: Great Ideas Can Come From Casual Interactions
Next: A Remembrance Prevents Forgetfulness