Every time a new month comes, we christen it with a brand new Top 5 list.  All of these lists are created off of reader suggestions.  Our latest Top 5 list is the Top 5 Lamest Super Costumes.  These can be Super “hero” or “villain” costumes.  The Writer’s Blok has dug up many different outfits from ugly to absurd and worked as a team to filet them.

Killer Moth barely cracks our list because his costume cannot be ignored.  He has orange and green striped pants, which seem to have nothing to do with moths at all.  His color pallet that he has chosen to work from is neon green, neon orange and purple with a yellow “splat-looking” symbol on his chest.  I’m pretty sure that the “splat” is supposed to look like a moth, but the “splat” might be more appropriate as I am sure he gets beaten up a lot.  Truth is, he is a Batman villain in a dark and gloomy Gotham and I’m sure that his getup attracts the heroes to him like moths to a flame…that’s embarrassing.

So this version of Ray Palmer, The Atom was created from the Blackest Night crossover event in DC Comics.  In the event, we saw the births of the multi-colored lantern corps.  The various avatars of love, hope, will, fear, rage and so on chose champions of their ideals and deputized heroes and villains of Earth.  These amazing Green Lantern-esque powers were handed out around the DC Universe in a grand fashion and all of a sudden, many characters had far greater powers than before.  They got different costumes when their powers manifested.  The Flash turned blue for the Hope that he possessed.  Wonderwoman found herself in the pink attire of the Star Sapphires (Love).  Ray Palmer found himself dressed like a sexy effeminate gogo dancer from Studio 54 after the Indigo Tribe imbued him with Compassion.  With bell bottoms, body paint, and various other accessories, Ray Palmer could have easily done the YMCA in place of The Chief.
3.  Arthur from The Tick 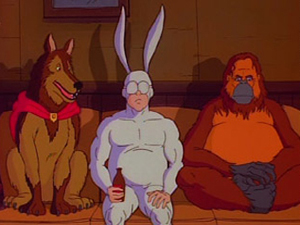 The Tick was a comic book that was never as popular as it should have been in the 90s.  It featured The Tick, an invulnerable and super strong hero and his sidekick Arthur.  Although a Jewish accountant by trade, Arthur takes psychiatric leave and becomes a moth-themed hero with flight and night vision provided by his suit.  The unfortunate part for Arthur is that without a flashier persona, he finds himself stuck in the limbo that is sidekick-dom.  Many people often mistake him for a rabbit and his antennae or ears are a constant source of humiliation for him and amusement for us the reader. 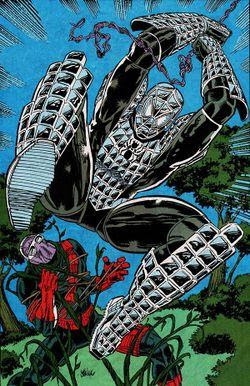 How do you get on this list?  Well, you wear an undeniably ridiculous looking costume.  That is not the case with Spider Armor Spiderman.  His costume looks cool.  That is not the problem.  The problem is that it was a marketing ploy that made absolutely no sense.  The Spider Armor was created for the foil cover of Web of Spiderman #100 and sold a lot of books and action figures, but didn’t do much in the way of logic.  Spiderman is athletic and nimble.  His powers depend on him being that way.  Encasing him in hundreds of pounds of metal is GENIUS!  This costume was part of a trend that eventually encased Captain America and Daredevil in armor too.  This period of time in Marvel Comics was short-lived and seen as a black spot of reader manipulation over plot development even to this day. 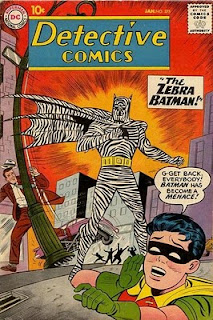 I would briefly like to say that the non-sensical origin of the Zebra Batman costume is so great that I am honored to have it as our number one.  The other four were pretty bad, but the seriousness that this costume is dealt with really puts it over the top.  The plot of Detective Comics #275 is as follows:  A villain named the Zebra Man covers Batman with magnetic energy, which of course makes him zebra-patterned as well.  Batman’s polarity causes him to mess up the gravity all around him and look like a rug in a pimp’s bedroom.  He rips trees out of the ground just by being close to them and is incredibly dangerous to those around him.  The Zebra Man can control his polarity with a belt which Batman eventually steals.  Batman removes the energy and also stripes from his body with the belt.  The Zebra Man is taken to jail and the crisis is averted…all except the fact that Batman was striped like a zebra long enough to have had it captured in many panels.  The Zebra Batman situation is kind of shocking because the story is dumb and the suit is tacky. 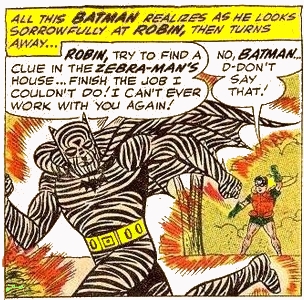 So, there’s our Top 5 for August.  I feel like we did a good job high lighting these oddities in super-livery, but would be interested in your thoughts and comments below.  We had two entries about moths, so I know that trying to pull off a moth persona must be tougher than I had ever considered.  Guess I will have to find a different alter ego than “Luna Moth” when I begin my crime-fighting career as a costumed vigilante.  Until next time, read on!

Previous: The 6th Gun (Part 2)
Next: Cowboys and Aliens