Welcome to Comical-Musings.  Last month, we did a Top Five list for the first time.  It was nearly our highest viewed post!  I vowed to do a top five list every month and looked to YOU to provide ideas for what we can “top five-ize.”  We have only had one request and it was by my wife, Jacqueline.  In her honor and because my dad always said to obey the wishes of pretty girls, I have compiled this June’s top 5 list and it is the “Top 5 Lamest Villains.” 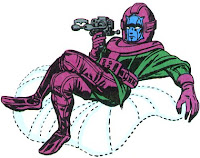 It’s safe to say that we all have a certain “feeling” about time travelling villains.  I mean, they could go back in time and do something to ruin your life before you were even born.  The problem with fearing them is that they are usually so arrogant that we as readers just want to punch them in the face.  Kang can shoot people with guns from the future and fly with technology from the future and use things that would not be conceived for hundreds of years, but he can’t gain my respect.  How annoying is that?  If Kang existed in real life, my friend Marshal would have already killed him on principle.
Note From The Editor: Josh Flanagan from ifanboy.com disagrees with this choice

Weather Wizard can control the weather with his wand of wonder.  The end.  That is all of his power in one sentence.  He flies around and changes the weather with a wand.  Harry Potter does that and he’s a good guy.  This skillset makes for kind of a one-dimensional villain.  How has he been terrifying people for 52 years?  Consider the fact that Weather Wizard is an enemy in the DC Universe where more than five people have super speed or laser eyes or freeze rays.  He should be a sitting duck!  Why doesn’t the Flash just take it away from him?  Why doesn’t Superman freeze the rain that he makes, imprisoning him, than crush his wand into powder and feed it to him?  This villain is a victim of lameness in powers as much as he is a victim of location.  Nowadays, they are just beginning to switch his powers to be more internally based and that helps a little.  If he was a villain in an independent comic where there are no heroes, he would be a god.  As it stands, he is a bottom feeder.

Stilt-Man is a villain with a terrifying power!  He has telescoping legs.  Oh my!  But, seriously, Stilt-Man is lucky to be this high on the list.  In the old days, a criminal who can get taller might have made people nervous.  I mean, he can rob your second story from the ground!  Nowadays, Stilt-Man is an after thought.  He used to be a Daredevil villain, which makes sense as Daredevil is not really “super-powered” per se.  I get all shivery when I think about Stilt-Man getting taller and Daredevil kicking him/hitting him with a billy club all over Hell’s Kitchen.  That wouldn’t be boring at all…  The last memorable thing that he did to my knowledge was getting killed by The Punisher in Marvel’s giant crossover event, Civil War.  When you stop and really consider everything, Stilt-man is still dumb. 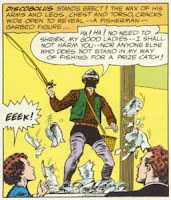 Sportsmaster is a villain that I was not even cognizant of at the beginning of this blog.  Through mild internet research and a desire not to copy the work of others, I stumbled upon him.  He is featured as #3 atop the “Top 10 Lamest DC Comics Villains” on acomicbookblog.com.  “Did Scott really just advertise another blog on his?!?!”  Yes I did.  I happen to disagree with them in the fact that I think that he is one place worse than they do.  He puts acid on fishing lines, hits exploding hockey pucks, and throws flying baseball bases.  This guy is a renaissance man!  Look in the picture that I referenced to the left.  He shows up hidden in a wax statue with “criminal fisherman” gear.  What an idiot! 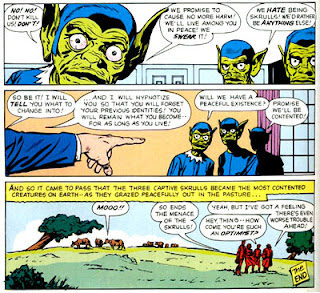 I hesitate to write the Skrull cows as the number 1 lamest villain, but they live in infamy.  What they are, what they became, and what came from them is just legendary blight on the comics industry like Spinal Tap is a blight on the music industry.  Let’s start from the beginning.  When the Fantastic Four’s storied superhero career was just taking off, they encountered a team of aliens called “Skrulls.”  Skrulls are shape-shifting aliens that invaded Earth.  The Fantastic Four thwarted, caught, and hypnotized them into shape-shifting into cows.  Reed Richards made them into cows as a peaceful and ethical imprisonment.  Then the 90’s happened and things got KA-RAZY!  Mark Millar and Grant Morrison were young, aspiring writers from Scotland and Marvel was looking to do something different than a main stream book.  Millar and Morrison needed beer money badly and so was born “Skrull Kill Krew.”  The plot of the book, which dripped from whiskey soaked lips, is that the Skrull cows are harvested for beef and the people who eat the hamburgers get horribly sick and transform into Skrull mutants.  The Skrull Kill Krew take to their motorcycles with chain-guns in hand to kill all of these terrible monstrosities.  The Skrull cows start out as Alien invaders, become cows, and go out as weapons of mass destruction.  The craziness of the plot, the absurdity of the canonical information from Fantastic Four, and the way that they ultimately effected the Earth makes the Skrull cows the #1 lamest villains on this list. 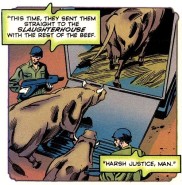 Thanks for reading this post and if I haven’t told you enough, I am thrilled to have you as a reader; both of my blog and of comic books in general.  I hope that this Top Five list is loved as much as the last and if you think about it, share my link on your facebook.  I will be waiting for a suggestion on July’s Top Five list.  You can post it in the comments below.  Remember, keep reading!