So, I have decided that I am going to try to do a monthly “Top 5” post.  These posts should be a little bit shorter than normal, but informative nonetheless.  I would love your suggestions for “Top 5” categories for future posts, so put your suggestion in the comments below and I will try to generate the “Top 5” list.
Today’s Top Five is the “Top Five Most Sadistic Villains.”  This is easy to expound upon as these are the villains that creep me out the most.  I mean, these guys may not be the Antimonitor, Galactus, or Apocalypse type villains that destroy galaxies, but they could be the kind of villains that would enact some sort of random violence on my family.  These guys are sadistic! 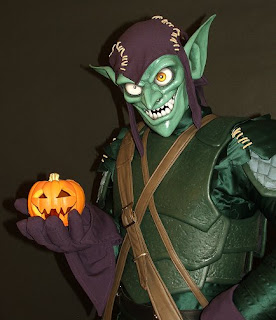 The Green Goblin is one screwed up fella.  His alter ego, Norman Osborn is a captain of industry and has a wife and kids.  Oscorp is successful, although sometimes nefarious, but during his “off” time, Norman is a psychopath.  He was played in the Spiderman movie by William Dafoe.  Many people remember him for taking Gwen Stacy and throwing her off of a bridge in Amazing Spiderman #121.  That’s not what I think of when I think of crazy old Norman, though.  I think of  when “Osborn kidnaps Flash Thompson (under the pretense of picking him up from an Alcoholics Anonymous meeting), force-feeds him whiskey and has him crash a truck into Midtown High School, where Peter works. Flash survives, thanks to his excellent physical condition, but he suffers severe brain damage that leaves him in a coma.” – Wikipedia
That’s the Norman that we love to hate.

I would make the broad statement that after Christopher Nolan’s “The Dark Knight,” everyone is familiar with the Joker in one way or another.  Whether it be shooting Barbara Gordon and paralyzing her, poisoning the water supply, filleting someone alive, blowing up an elementary school, torturing the general populace, or just simply killing people for no reason, the Joker belongs on the list and behind bars. 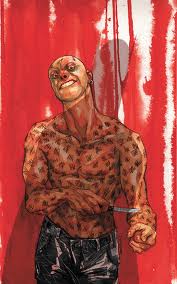 This character is well known to hardcore Batman readers.  He has been prominently featured in Batman: Streets of Gotham and the Batman: Arkham Asylum video game.  Mr. Zsasz is a cold blooded killer.  When he takes a life, which he does alot, he carves a mark into his body.  As you can see from the picture on the left….well….yeah.  In Streets of Gotham, the artist lets you take a look through Mr. Zsasz’ eyes and it is not pretty.  He sees a world bathed in red, with every possible human injustice committed on any human being unlucky enough to be caught in his icy gaze.  Mr. Zsasz is a butcher and he relishes the opportunity to attack non-powered innocents with a small, scalpel-sized knife.  He is sadistic for sure. 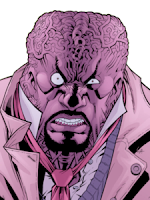 Angstrom is super creepy, because he starts out looking like the guy to the left.  Just your run of the mill, African American dude.  He has dimension teleportation powers, but Invincible offers a twinge of reality to it.  Angstrom can hop from dimension to dimension, but it is real time.  By saying that, I mean that in my dimension, my desk and my computer is in front of me, but if Angstrom hopped into a dimension with a more prehistoric vibe, he might fall into a lake.  The Earth is mapped out and settled differently depending on the dimension.  That is why Angstrom needs to collect the knowledge of all of his extra-dimensional counterparts (Alternate Angstroms) and put it all into his brain.  With the super-intellect that nearly all Alternate Angstroms possess, he is able to map all dimensions.  One little hiccup.  In trying to save Invincible, Angstrom disrupts the merging of the minds and is physically disfigured.  The accident kills all of the Alternate Angstroms and warps Levy’s mind.  He believes that it was Invincible’s doing that disfigured him.  Angstrom sets out to punish Invincible and that is where he makes the list.  He domestically abuses Invincible’s mom and baby brother to mess with him.  What kind of creep does something like that?  This one. 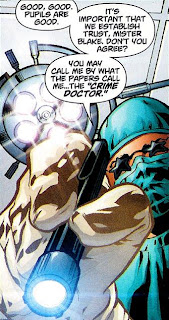 Now, you are probably asking yourself “What?” or “Really?” or even shouting silently “I’ve never even heard of that guy!”  It’s probably true too.  I had not heard of him either until I read Villains United and watched him gleefully torture the Secret Six, like it was some kind of Tarantino film, for almost a whole issue.  Needles, electroshock therapy, creepy dialogue, all thanks to the Crime Doctor.  I mean seriously, I have a hard time remembering last week and his scenes in Villains United have haunted me for years. 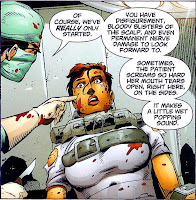 So, there you go.  Top Five Most Sadistic Villains…sleep well.  Let me know if there is a top 5 list that you would like to see for next month.

Previous: I’m so happy because I’m feeling Invincible!
Next: A Great Interview With Cullen Bunn Podcasted