Welcome to Comical-Musings.  We are excited to be into the month of July and Comical-Musing’s “Month of Independents.”  The Writer’s Blok will be dropping fresh reviews and suggestions on you in a few days and I am terribly excited about what this month holds for your favorite blog.  Our most read posts are still our Top 5’s and today’s should be right there with them in hits soon.  Our Top 5’s have always been and will always be taken from your suggestions.  Joe Butler suggested Top 5 Overpowered Heroes and his wish has been granted.  Here, we have collected some of the smuggest heroes to ever save the planet, just in time to be ridiculed.  Enjoy! 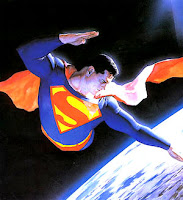 Superman makes the list for a few reasons.  Reason one, laser eyes.  Superman can laser stuff from far away or up close.  He has even lobotomized someone by refracting his lasers through a man’s eyeball lenses.  Reason two, freezy breath.  Most people forget that if Superman blows on you, you will freeze into a block of ice.  The real reason that he makes it on the list, however, is because if anything makes him mad, he can fly backwards around the earth to go back in time.  That’s probably useful.  The only reason that he is number five is because Kryptonite exists. 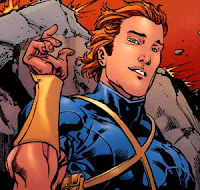 This character is from one of the least popular runs on Ultimate X-Men.  The character’s powers are reality-changing (a vanguard of many heroes on this list).  He gets a coveted spot on the X-men and is the boss of the team in 3-4 issues before everyone starts to realize that they are acting kind of weird.  He is subconsciously changing reality to be in his favor and everyone is bent to his will subconsciously.  This character can do ANYTHING.  After everything that happens in this book, he just walks away to think about what he should do with his powers.  Wolverine should have killed him, or put on a dress if Magic willed it.

The Squadron Supreme was created by Marvel in 1971.  This was supposed to be the Justice League of America in the Marvel universe and Hyperion was their Superman.  He flies, has super strength, regenerative abilities, invulnerability, freezy breath, laser eyes….blah, blah, blah.  He is a carbon copy of Superman, minus Kryptonite.  The original Hyperion was taken down by the Hulk when they fought The Defenders (The Hulk should probably be on this list, but truthfully emotional problems factor into weakness…just sayin’).  Superman – Kryptonite = number three on this list.

Dr. Manhattan – The only character with any actual super powers in Alan Moore’s “Watchmen” is Dr. Manhattan. So to compensate, he was basically given all super powers. Had he acquired his name though standard means, instead of being named by the government, he might have been dubbed something like “Do-anything Man,” since he wields the nearly god-like power to transmute all matter at a sub-atomic level with his thoughts. He is also omniscient and able to fly, change size, duplicate himself, teleport, and copy Bullseye’s forehead disfigurement. His only limitations seem to be the inability to manifest hair or pants, which gets really awkward when he goes to giant size. He looks somewhat like a member of the Blue Man Group, but unlike Tobias from Arrested Development, Dr. Manhattan seems to prefer to be forever-nude. What makes it worse is that he comes off as a pompous character that thinks he has evolved beyond everyone else just because he can atomize and restructure people and objects with his mind. So all this power rests in the hands of a blue jerk who thinks he’s better than you, and yet can’t even be troubled to put on a pair of slacks. At the end of the story he leaves to create life in another galaxy!? I suspect he will discover that while he can make all the people he wants, it requires some basic social skill to make friends. 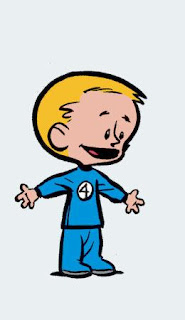 Speaking of reality-changing powers…Franklin Richards is no slouch himself.  “He is an Omega-Level mutant with vast psionic and reality-manipulating powers,” says Wikipedia.  Now, “psionic” was a term that was greatly over-used in the nineties.  It seemed that EVERYONE had psionic powers back then.  To get an accurate look at Franklin Richards’ powers, think Jean Grey of the X-Men and Scarlet Witch of the Avengers mixed together.  We are talking Dark Phoenix Saga mixed with House of M powers.  Franklin is so powerful that in Onslaught, his powers basically destroy the Marvel universe.  Franklin is so powerful that he becomes Galactus to keep the universal balance in the Earth X comic books.  He is so phenomenally overpowered that it is kind of shocking that he is a young boy.  All of that power in an adolescent makes Franklin Richards the most overpowered hero on our list.

Previous: Even Hawkeye Has a Blindspot
Next: Happy Month of “Independents”