Welcome to Comical-Musings, your place for reviews and suggestions on what is good to read past and present.  We are thankful that we have your attention for this hot minute as we present our Top 5 list of the month.  Much deliberation went into this Top 5 list and we ultimately decided to go with Top 5 Worst Hair Cuts In Comic Books.  These haircuts, no matter what their reasoning end up ultimately damaging, dating, or embarrassing the characters and even us as readers.  Without further adieu: 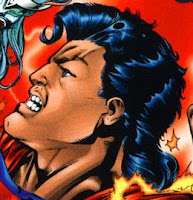 Superman was a big deal in the 90’s.  His death brought a great deal of attention to an already popular industry.  He rose from the grave and was incredibly successful in sales as the writers and artists made what Ifanboy.com referred to as “jet plane money.”  Then in an ultimate stroke of genius, they gave him a spit curl mullet.  To my knowledge, Superman does not know karate and cannot carry a tune, yet he shares a hairstyle with Steven Seagal and Billy Ray Cyrus.  This was a mistake, but it can be forgiven as it fit with the times and is the haircut he wore in Grant Morrison’s fabulous JLA run.  That’s why it’s only number 5. 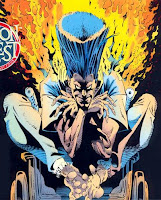 Charles Xavier’s son, David takes the X-men stage in 1985 with two very distinct problems.  Problem number one is that due to his dangerous powers, Charles has kept him isolated and under wraps for years.  Problem number two is the fact that his hair is so horribly high and firmly set that even DJ Pauly D from The Jersey Shore would be jealous.  I’m not sure if his reality warping powers make his hair nearly as large as his torso, but it is certainly not flattering.  The only good thing about Legion’s hair is that it identifies him as a nefarious character.  Even when he “turns his life around,” he still supports large and firm hair with a liberty spiked mohawk.  It’s a shame that he has had such a difficult life…with hair like that. 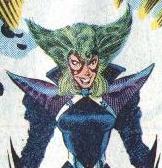 We all go through phases in our lives.  Oftentimes, a haircut can signal a new phase beginning or ending.  Quinn Fabray from Glee for instance is going darker as a character and has shockingly different reds and layering from her usual plain jane blonde style.  Polaris had one of those times when she fancied herself leader of the villainous Marauders.  She adopted a hairstyle that matched her pointy costume quite nicely, but was a sort of “Wolverine Mullet.”  Need to change my image to bad girl…add one one “Wolverine Mullet” and there you go!  This hairstyle is awkward and will probably end up in Lady Gaga’s next video now that I have spotlighted it. 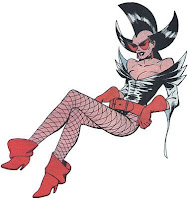 Again a villainess with a shocking costume!  John Byrne’s Magpie was unforgettable with her 80’s style and GIANT tri-hawk mohawk.  Batman and Superman team up to take her jewel-thieving behind to jail.  This is quite possibly the most outlandish looking character on the list.  Apparently bad hair never dies as Magpie is one of the notable villains resurrected by the Blackest Night crossover.  It was revealed in Man of Steel #3 that the startling hairstyle that Magpie wears is actually a wig.  That means that she chose to wear it.  That might be a bigger crime than any of the jewels that she stole or guns that she shot.

Guido Carosella, AKA Strong Guy is an easily recognizable character in the Marvel Universe.  He has been on multiple X-teams and is generally an imposing figure.  His mutant power is to absorb kinetic energy, but he has to expend it in ninety seconds to prevent being disfigured or injuring himself.  He is unusually large in size. He is a massive mound of mutant.  Strong Guy is the bruiser of the X-Factor team and fills the role comfortably.  His hair is also an unusual size.  It is tiny.  It seriously looks like someone squeezed a tube of toothpaste on his head.  It’s not attractive or fashionable, so Comical-Musings has one suggestion for Guido Carosella.  Shave it off man.  Chicks dig Captain Picard, you can totally pull off a shaved head.  It’s better than the alternative.