The new Top 5 is here!  It seems like it took forever for us to get to the first of the month, but I am glad to be here!  Last month, we had over 1,000 views of our page which is very exciting.  We are constantly in need of new viewers, so don’t be afraid to rate us on Stumbleupon or share us on Facebook.  It would be much appreciated!  Today, our Top 5 is the “Top 5 Worst Ways That I Have Seen Someone Die In Comics.”  All credit for the idea to do this Top 5 goes to Aberdeen.  These featured comic book demises range from mundane to ridiculous.  There are some characters that are hard to kill and some that are nearly impervious, but chances are good that if their sales are low or if Bendis is writing them, there is a way for most of them to die.  The images associated with these deaths are gory and not necessarily appropriate for younger viewers.  If you are still interested in reading this post click “read more” below, won’t you?

Wolverine is “the best at what he does,” as the infamous catchphrase suggests.  What he does is stab people.  Wolverine has unbreakable adamantium fused to his skeleton that he pops out as claws to stab very breakable flesh.  He has used these gifts from the Weapon X program to stab a great many people over the years.  Street toughs working for a crimelord…stabbed!  Mutant soldiers killing humans in an act of genetic racism…stabbed!  Swat guys…stabbed!  Young adults with out of control powers…stabbed!  Various soldiers on various sides of various conflicts from every war dating back to possibly the Civil War…stabbed! Wolverine has stabbed just about everybody.  There has even been times that he has gone crazy and stabbed members of The X-Men (Northstar was murdered by Wolverine when he was under the control of the criminal organization HYDRA)  The truth is that the reason getting stabbed by Wolverine makes it onto the “Worst Ways That I Have Seen Someone Die” list is because it is such a generic death.  Wolverine stabs you and you join a club of about 1,000,000 other people that have been stabbed by him.  It’s actually kind of degrading.  At least he could decapitate you.  That would probably put you in the same category as a couple thousand others. 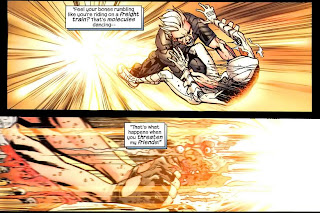 In The Ultimates Volume Two Issue Twelve, many very messed up things happen.  The United States is over-run by a group of foreign supervillains made up from countries that hate it.  They tactically wreck shop on the American superheroes and it seems like they are equally matched to their American counterparts.  Hurricane is a speedster from North Korea and she causes great havoc on the battle field until she comes into conflict with Quicksilver.  Quicksilver doesn’t take well to her boasting and decides that it is time to show her what it is like to really go fast.  This execution is powerful and personal and really fits in with Quicksilver’s arrogant character.  After she’s dead and gone, he sits on the ground panting as Hawkeye tells him to “quit sitting around and do something!”

3.  Heart Ripped Out By Being Created To Kill You 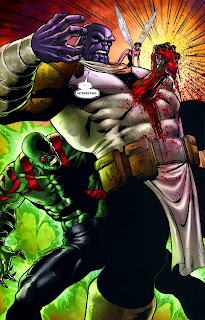 Thanos is a god-like alien from the planet Titan and long-time villain to the galaxy.  When his father, Mentor, realized his destructive intentions, he knew something had to be done.  Mentor used the raw materials of a human man that Thanos had killed in cold blood to create Drax The Destroyer.  Drax is a creature that is only satiated through ruining or “destroying” Thanos.  Drax travels the galaxy looking for ways to undermine and murder his star-crossed enemy.  It is in the Annihilation Saga that he finds his chance!  Thanos is vulnerable for only a moment and Drax moves in for the kill.  Drax takes his heart and with his dying breath, Thanos sees the physical manifestation of Death as he shuffles off this mortal coil.  The fact that:
A. There is a being specifically created to kill him
B. He gets his heart ripped out by a dude with tattoos and knives
makes Thanos’ death very exotic and over the top.  Having your still-beating heart ripped from your chest is a bad way to go.  Ask that guy from Temple Of Doom. 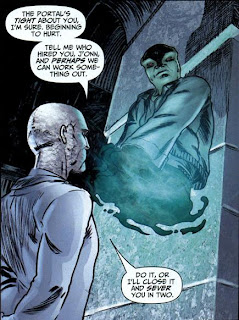 The Outsider is a character that was born from DC Comics mega-crossover event Flashpoint.  He is a man of Indian descent with rocky skin and devilish intelligence.  Over the years, he has made many enemies across international boundaries, but none greater than his off-world enemy, the Martian Manhunter.  You see, in the Flashpoint world, The Outsider was the one who teleported J’onn J’onzz from Mars to Earth.  Seeing J’onn as something to be feared, The Outsider imprisoned, tortured, and ultimately sold him to the Russians so that they could have their very own super being.  J’onn escapes and comes to The Outsider for vengeance.  After a long supervillain diatribe, The Outsider creates a portal around J’onn, transporting half of him to another world.  The Outsider gives J’onn one chance to give up the person who put the hit out on himself.  J’onn stalls and with the words “I never ask twice,” J’onn’s abdomen is severed in two killing him instantly.  Cold, intelligent, and painful.  This was a rough way to die.  I guess the Martian Manhunter underestimated The Outsider.


Sometimes, in life, you get punched in the face.  Sometimes, it just hurts a bit.  Sometimes, you break an orbital bone.  Sometimes you get a black eye.  Sometimes, when Nolan and Alan from Invincible punch you in the face, your head explodes.  After being imprisoned by a cruel Viltrumite (bad alien) jailer for months, Nolan and Alan plan their escape.  When the plan springs into action, they are free and quickly fighting multiple Viltrumite captains.  When the final conflict takes shape between the prisoners and their captor, brains splatter and blood flows.  This is quite possibly the most epic way that I have seen anyone die in a comic book ever.  This beats psychic lobotomization, being lazered to death, and pretty much anything else you can think of.  This panel was crazy and if you wanted to buy the original artwork, you could do so here at Splash Page Art for $275.

If you can think of any worse deaths that you have seen in your comic reading adventures, feel free to post them in the comments below.  Also, remember to log on for our What If week which is 9/5 – 9/10.  During this week, we will be dropping a new post daily, so you will want to bookmark Comical-Musings and check back each day.  Otherwise, thanks for reading this month’s Top 5!  We look forward to bringing you tons of exciting content all September.

Previous: What A Perfect Day To Frequent A Comic Store
Next: An Open Opportunity In The Writer’s Blok