As I’m sure you have figured out by now, you have arrived at Comical-Musings and we are big fans of everything “Ultimate” in the Marvel Universe.  We have talked over and over again about hom much we like Ultimate Spider-Man and The Ultimates and Ultimate Human and Ultimate Origins blah blah blah.  We have been up and down the Ultimate street, seen many of the cool re-vamped characters, and ultimately, we love Ultimate stuff.  I have read much more in the Ultimate Universe than I have even reviewed.  It is just ingenuitive stuff and you can expect to see more Ultimate books reviewed as time goes on.  Today, I thought that I would take a look at a secret corner of the Ultimate Universe with Ultimate Adventures. 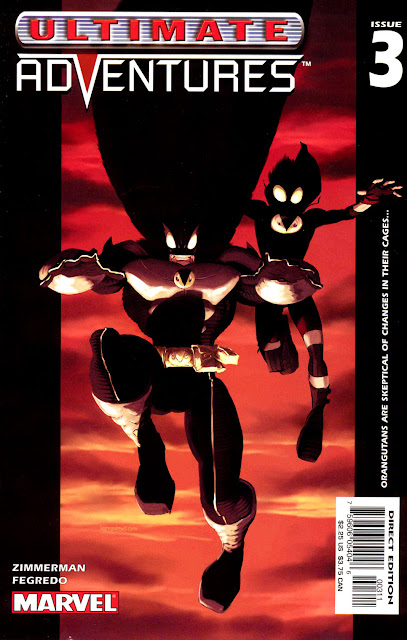 Ultimate Adventures is the Ultimate Marvel re-telling of the Batman story written by Ron Zimmerman with Duncan Fegredo being the artist.  This creative team is a very odd pairing, but seems to work.  Fegredo’s art is in line with what the rest of the Ultimate books looked like in 2002 and is incredibly shocking due to his Hellboy pedigree.  Fegredo was the first man ever trusted to draw Hellboy that wasn’t Mignola.  Zimmerman’s story is clever and at times surprises you with how good it really is.  Zimmerman is famous for writing and acting on television shows like 7th Heaven and The Howard Stern Show, so the fact that he was able to write a comic book at all is impressive.

In Ultimate Adventures, Jack Danner is our Bruce Wayne and the whole story of issues one through six is Jack picking up his ward, Hank.  Hank rounds out the story as our Robin and drives the book through his adoption, to his discovery of Jack’s other life, and eventually his baptism into crime fighting.  Jack is accompanied by his butler, Samuel L. Jackson from Die Hard…I mean Nick Fur…I mean Daniel Tolliver and Asian assistant Lee.  Hawk-Owl patrols the streets of Chicago after his parents had an accident and died.  This is the coming of age story where Hank grows into a young man and Jack grows into a responsible adult.  There is a villain (which we will get to later), they fight, good wins and this tight little mini-series comes to an end.  It finishes out as a good read if maybe a little bit hamfisted.

The good things about Ultimate Adventures vary wildly.  Sometimes it’s very similar to Batman and that is good.  Sometimes it’s totally different than Batman and that’s also good.  Hank is a smart-mouthed kid with lots to say and therefore, this book is PACKED with dialogue, most of it good, so it really feels worth the effort to read, even if it does get tiring.  Jack is very similar to how I think Bruce Wayne would be in real life…a little clueless.  We always see the iconic tale of Batman taking in a wayward youth and being a father in and out of the cowl, but Bruce had no father.  He doesn’t know how to be a parent and Jack’s missteps echo that more realistic approach.  There are little allusions to the rest of the superhero community, but the Ultimate Adventures world still feels isolated.  You can imagine that I was genuinely surprised to see The Ultimates show up mid-arc to demand Hawk-Owl’s membership on the team.  This gives us a view to why Batman couldn’t be an Avenger.  It was funny and well thought out.  I really appreciated that the concept was able to feel like something new while throwing back to that which was already established.  The very last scene in issue six was the absolute perfect ending.  We see Hawk-Owl and Woody save a young boy and his parents from being mugged after walking out of The Mask of Zorro movie.  This was impactful as the very same situation, at the very same movie was what created Batman.  It was just the icing on top.

With good ideas, there are inevitably bad ideas and sometimes they get left in.  The Principal is an absolutely terrible villain.  I get that he is supposed to be a “school themed Joker,” but it is ridiculous.  The fact that finding his spouse cheating on him makes him stab her and her lover before turning to costumed crime is a little hard to swallow.  Nearly as hard to swallow as the paddle situation.  Mid-story, the writers all of a sudden announce that the Principal of Hank’s school use paddles as a plot device to get to cattle-prod paddles and buzz saw paddles and whip paddles.  It was just a very stupid move in an otherwise intelligent, albeit Silver Age style tale.  I also didn’t care for the fact that every bully in school was an African American save one.  That’s a little racist.  As a young man, I attended a racially diverse school and can assure you that Caucasian children are just as mean if not worse.  The fact that I am having to explain this is also why it was a bad choice.

The Ultimate Adventures series was six issues long.  That was it.  As a self contained story arc, I think that it accomplished it’s goals.  Re-telling a story that doesn’t necessarily need to be retold is often a losing game, but I think when Ultimate Adventures wrapped everything up, it was a B-level comic book.  There were good things and bad things.  If the series were allowed to live a little longer, it could have probably gone either way.  More time to develop a real villain could have added to the intrigue.  I think that the overall weakness of The Principal is what held Ultimate Adventures back.  If you want to check it out, all six issues are available on mycomicshop.com for $2 or less a piece.  That rounds out at about $10-$12.  It’s certainly worth that.