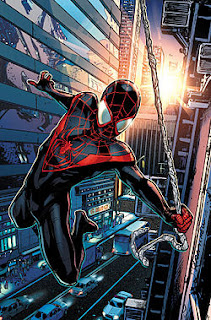 Before I begin, or before I begin discussing the comic in question, allow me to first offer a little insight into who I am (odd, I know, for a blogger who blogs under a pseudonym). While I may write under the moniker, “The Blackness Monster,” a more apt title for the man, boy, behind these words would be, “The Half-Blackness Monster,” and even then, I have always felt a certain disconnect to the African-American section of my skin tone. Yes, you may often find me “bumping” Biggie or NWA whilst rolling down the street and “sipping on gin and juice,” but as evident in my use of quotation marks and the world whilst, I am a far cry from the ethnic stereotype commonly portrayed on BET or Michael Bay movies. Now, psychology could probably explain all of that, but that’s not the point of this blog.
The point of this blog is the Half-Blackness Spider-Man, and as the resident ethnic blogger here at Comical-Musings, or rather, as the closet thing Comical-Musings has to an ethnic blogger, I have taken it upon myself to offer up my opinion on Brian Michael Bendis’s new portrayal of Spider-Man. Let me say also that I spent my formative years in the suburbs which, much like the comic book universe, has a particular white coating with specs of diversity sprinkled throughout, and like Morales, the new Spidey, I happened to be one of those diversity specs. Sure, comics have John Stewart, not to be confused with Jon Stewart, as a Green Lantern and the Black Panther and what not, but the heroes the community lauds the most and who have the multi-million dollar produced with their names are about as white as The Man who continually oppresses me, and half of my people, every day. Naturally, this means a new, darker Spider-Man is guaranteed to cause a stir or will at least be different. But how different?
Not too different, actually.
This is, after all, still the same universe and still the brainchild of Bendis. Norman Osborn is still a lunatic with far too much money who experimented on himself and became the Green Goblin. Miles even has his own wise uncle to provide spiritual guidance. His Uncle Ben, though not named Uncle Ben presumably because that guy on the rice box would make that a little awkward, is of a sketchier, thieving variety, but he has already being set-up as the boy’s mentor (and will likely have to die so that Spider-Man can be born. Someone always has to die). Of course, Miles, unlike his predecessor, has parents, and yes, his father is both present and a decent guy (and if you assumed otherwise, I think that makes you racist, but I’ll have to consult the Reverend Jesse Jackson). Still, despite its differences, this new Spider-Man is rather similar to its Caucasian counterpart and deliberately so.
Bendis makes a point to start the issue with Osborn in his lab being all crazy and threatening and bullying his inferiors as he did in the first issue of the original Ultimate Spider-Man. It’s a nice call back and a reminder that, ethnic or not, this is still Spider-Man. Perhaps, there’s a larger point to be made about duty and honor surpassing the minor discrepancy of race, but Bendis does not bring it up; therefore, it’d be irresponsible for me to add existentialism where there is none (and where it is unnecessary). Bendis does, however, address the “responsibility” theme that has always maintained prevalence in the Spider-Man mythos, and though not-Uncle-Ben (I really should look up his name) doesn’t sit Miles down (yet) and explain to him that with “great power comes great responsibility,” he alludes to that idea when Miles pays him a surprise visit after being accepted into a very exclusive charter school. See, Miles doesn’t believe he deserves his admittance into the school, but not-Uncle-Ben informs him that he must make the best of the opportunity bestowed upon him. In other words, “great power … great responsibility … don’t do crack like I did.”
This is also where Miles gets bit. Of course, he gets bit. He has to get bit. Not-Uncle-Ben is a little better than a petty thief. It turns out that he managed to break into Oscorp, in some rather impressive spandex, and steal the genetically enhanced spider that will eventually bite his nephew and launch a new, soulful era of Spider-Man.
And that’s it. That’s all that happens. Norman Osborn is crazy. Miles gets into a charter school and suffers from poor self-esteem (like Peter Parker, I might add). He visits Not-Uncle-Ben who tells him to make the most of it.  Not-Uncle-Ben’s stolen spider bites his hand. There’s an altercation between Not-Uncle-Ben and Miles’ father, who is not a deadbeat or in prison, which implies Not-Uncle-Ben has a shady past despite his wisdom. Then, Miles runs away and turns invisible. Oh yeah, I guess black Spider-Man can turn invisible. The end.
It’s hard to speculate exactly where the series will go from here, but it has all the makings of a typical Spider-Man arch. But you know … with more afro sheen.

Previous: Madrox
Next: A funny little video about drugs and hypocrisy…