Sometimes, when you hear about something, it sounds so good that you HAVE to check it out immediately.  This was the case with the Ultimate Knights story arc in Ultimate Spider-Man.  I heard the boys from Ifanboy.com mention it briefly on their Pick of The Week Podcast and had to stop what I was doing and get to Barnes and Noble for Ultimate Spider-Man trade paperback number eighteen.  The concept pitched to me was “Ultimate continuity versions of many different Marvel characters fighting together.”  I was sold.  By the end of this review, you should be too. 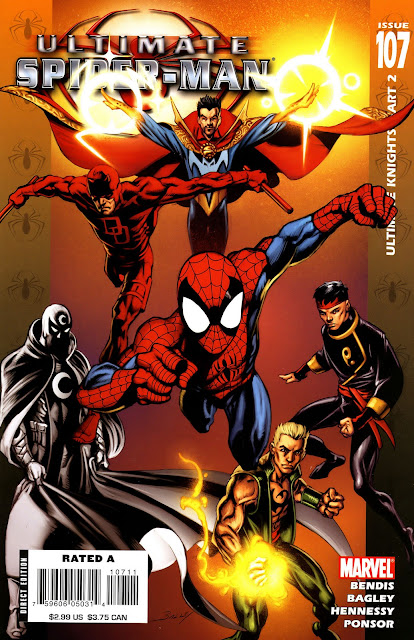 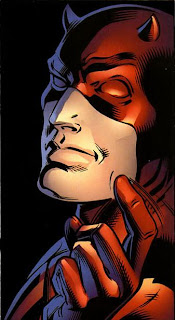 It is, good I mean.  The Ultimate Knights story arc is greatness.  We see characters begin in the typical goofy team-up plot, but as Bendis begins to mix in realism, things get muddy and deadly.  Our heroes have a plan in mind to wipe out the Kingpin, but this isn’t the Kingpin of yesteryear.  The cruel, calculating, financial giant of a man that is Wilson Fisk in the Ultimate continuity is no joke.  The way he is written gives him much more credence as a “super” villain, not in the power that he has inherently, but in the power he possesses through wealth and cunning.  We see him turn the table on our heroes and give them more grief than even they had planned for him.  The whole thing escalates and escalates until we reach the climactic moment where Daredevil snaps.  I have never liked Matt Murdock (Daredevil), but I am pretty sure that his actions were my favorite parts of Ultimate Knights.  The supporting characters were good too.  I still found Iron Fist easy to relate to when he has to deal with the shocking twists that his road takes.  I even enjoyed going along for a kooky ride with Moon Knight through all of his various personalities.  Possibly the only letdown I experienced in Ultimate Knights was that I didn’t get Dr. Strange at all.  He didn’t make sense to me and I couldn’t empathize with him.  Come to think of it, I am not sure why he was even there…  Shadowcat’s inclusion, however, was perfect.  The love triangle between Kitty, MJ, and Peter provided the teen romance angle that reminds you that Spider-Man is just a kid with girlfriend issues, not a cold-blooded, trained, adult hero.

Anyways, Ultimate Knights was a peak on a run of comic books filled with high points.  It succeeded in providing me an affinity for a previously disliked character and entertained me with characters that I was more comfortable with.  I found myself surprised with how the story went and very pleased with my reading experience.  You can get Ultimate Knights (as well as all of the collected editions of Ultimate Spider-Man) at Instocktrades.com for $9.91.  Check it out and let me know what you think in the comments section below.