Welcome back to the Month Of Hawkeye here at Comical-Musings.  That’s right, we are focusing on a super-hero that is oft-forgotten, but worthy of praise all month.  I am talking, of course, about Clint Barton or,  Hawkeye.  A regular guy who shoots a bow and arrow with such precision and accuracy that it puts him toe-to-toe with the other Avengers.  I am so glad to have you reading along with us and today I have a special treat for you. 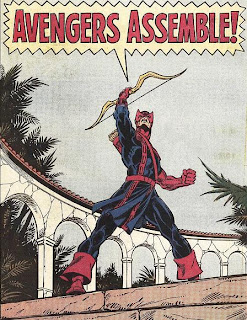 In 1984, three very important things happened.  The first was that my wife was born, the second was that I was born, and the third was that the Roger Stern’s West Coast Avengers were born.  Captain America and the Vision had such faith in Hawkeye that he sent him out to California, got him set up with his own Villa, and helped him assemble his own group of Avengers.  Hawkeye is tasked with picking out the six Avengers, briefing them on their new situation, and running the team.  His team consists of himself, his wife Mockingbird, Tigra, Wonderman, “Iron Man,” and an unknown member to round them out.  It was very interesting to me to read this comic as these characters are either completely different in modern comics or mostly irrelevant.  I never read older comics as I grew up with them in the nineties/two thousands, but I am shocked to say that this series is VERY enjoyable.  As a side note: it’s sad, and probably an indictment of our time, how crisp and well written everything is in this series and it makes me think that we are just dumbing down as a people group.  The characters are fresh and vibrant.  The one thing that they all lack is confidence. 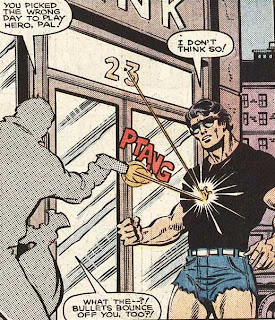 In the first two issues, Roger Stern identifies that none of these heroes feel worthy to be on the team.  Hawkeye isn’t sure he will be a good leader, Tigra feels like a C-lister, Wonderman lets a perp get away, Iron Man is actually James Rhodes (Pre-WarMachine) in the suit while Tony beats alcoholism, and Mockingbird has no powers.  None of them are confident in themselves and the book centers around them becoming confident as a team.  As lame as it sounds, the series does exactly what it says: The West Coast Avengers: Assemble.
As the book progresses, they become a team.  It’s so cool to watch the process and nobody writes slow enough, nowadays, to flesh out the details like they did in the 80’s.  There is just a sort of methodical, “work with what you got” mentality to Roger Stern’s writing that is refreshing.  The bad guy in a forcefield is about to get caught, so he runs into a gas pump.  The whole filling station explodes and he gets away…it just makes sense.  I really liked it. 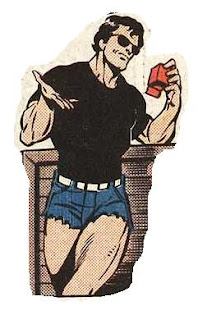 It’s very funny how dated everything is in this series.  Currency values are so different in West Coast Avengers: Assemble.  The heroes travel from around the country to get a $1,000 retainer payment for coming to California.  The bad guy pulls off a giant bank heist and walks away with $75,000.  Ha.  Signs of the times.  The first African-American character that is seen anywhere in this series is robbing a radio store.  Not to mention Wonderman, Simon Williams’ bad guy pimp outfit or cut off jean shorts…wow.
This series was very amusing to my sensibilities.  We can laugh at all the time sensitive elements that now seem out of place, we can get caught up in the surprisingly good story, and we can get a better feel for Hawkeye when we see him in a team leadership role.  The kind of awkward part for me was that although all of these things came into play and I was certainly entertained, I was almost more interested in Wonderman.  He proverbially “stole the show” with his crazy powers and questionable outfit choices.  The villain was a good challenge for the burgeoning team, but would be minced meat in the hands of the East Coast Avengers.
I obviously liked the series, but was not blown away.  Maybe the success and amusement that this series gave me will spur me on to more pre-nineties reading?  Only time will tell, so if you have a suggestion of an older book to read, post it in the comments.  Thanks again for reading! 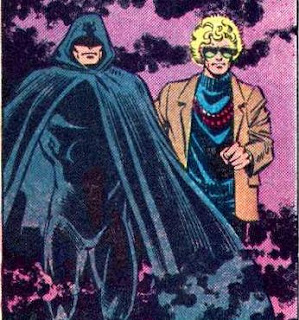