What If Conan The Barbarian Were Stranded In The 20th Century

The first full week in September is “What If Week.”  The Writer’s Blok is reading and offering thoughts and opinions on some of these gems of the Marvel Universe.  The What If stories are meant to examine what would happen if things went differently than it did canonically in the Marvel Universe.  The subject matter ranges from mundane to grandiose.  When you read a What If comic, it could be something as silly as “What if Wolverine Was a Girl?” or something as serious as “What If Charles Xavier Led The Brotherhood of Evil Mutants?”  You can see how the events in these books are interesting as they are isolated and free from the shackles of continuity.  Today’s offering is from the Cap, and it is “What If Conan The Barbarian Were Stranded In The 20th Century?”

“What If…” was a popular run of comics in the 90’s. I remember when they first started to come out everyone was talking about them and as most gimmick/ fad comics they ran their course and were relegated to distant memory.  As part of the website’s ever changing landscape to keep yall entertained, Scott assigned each of us a “What If…” ‘at random’, (but I’m calling shenanigans on that) and charged us with giving it a read and coming back with our impressions.  I call shenanigans because I know that Scott knows that I love Captain America and Conan, anyone care to guess which “What If…” I was ‘randomly’ assigned?
If you guessed “What if Conan the Barbarian were stranded in the 20th century” you’d be correct (how fortuitously ‘random luck’ is).  This comic mercilessly smashed together the two completely different echelons of characters that I love.  Before reading this I never would have equated the two in the same hemisphere, a conclusion I’m sure most of you would agree with.  They’re just too different, Captain America is a soldier bound by honor and duty to fight in defense of his country and to that goal no other allegiances take precedence.  While Conan is also synonymous for being a profound warrior, he fights for entirely different reasons, his attitudes towards combat and society all center on maintaining his own personal freedoms whether or not they clash with anyone else’s.  Of course this sets up for a perfect clash in their personal ideals.
The premise of the “What If…” is that Conan is transported to the present day, and how he adapts to routine ‘city life’.  Of course he’s at an obvious disadvantage of thousands of years in his learning curve, but Conan’s unrestrained prowess and incredible instinct for survival see him through the infancy of his stay in the 20th century.  Without question he’s more than a match physically for modern man, but what a lot of non-Conan readers fail to realize, is that Robert E Howard(1) wrote Conan as being incredibly cunning (not the dumb brute most people associated with his size, apparent barbarism or the Schwarzenegger movies).  His ability to adapt and learn is what allowed him to get through all Hyperborean scrapes and what allows him to thrive in the 20th century. 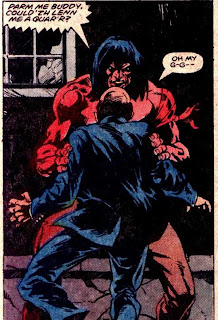 Eventually Conan picks up enough language to communicate.  That starts out simply as knowing enough language to rob someone and progresses into full functional conversation skills.  He eventually works his way into a leadership role of a local gang.  Conan’s natural leadership is epitomized as the gang transforms its demeanor and style to match Conan’s.  Eventually his gang members even begin to dress as he does and gives themselves the moniker ‘Barbarians’.  Even though he’s running a thieves den, Conan upholds his own sense of individualistic morality, dictating that innocents will not be harmed and the only people they should rob from have to be rich enough to not miss what’s being taken.  After a time the petty-robbery loses its luster and Conan wants to steal treasure worthy of legend. 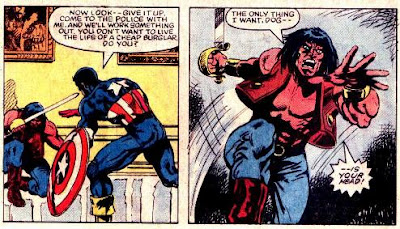 Of course with leadership like Conan’s, a gang is apt to attract the attention of local authorities and heroes.  Conan’s plot to loot a nearby museum is discovered by Captain America, who intercedes and battles Conan in an attempt to thwart his heist.  Conan, having never met his match since coming to the 20th century drastically underestimates Cap for the initial part of their scuffle.  Though once Cap has extinguished his element of surprise, the fight becomes trial of wills as Captain America’s speed is nearly more than Conan can handle, but Conan refuses to yield and eventually scores a hit with his sword to Cap’s shoulder forcing Cap to yield.
Throughout the battle sequences they do an excellent job of contrasting Cap’s sense of honor and morality with that of Conan’s.  After Cap recovers he and Conan have a final battle, where the real conflict of morality is boiled down to conclusion.  Both recognize the honor in the other, and in the end, part their separate ways.  At the beginning of this write-up I claimed how the different the two characters were in my mind’s eye, however the contrast of this comic illustrated that in essence they both fight for the same reason, freedom; they just have different terms and ways of protecting it.  This older comic isn’t as visually appealing as a lot of what’s being printed now, but the context and message within this “What If…” stands the test of time.

1 Robert E Howard was an author in the early 20th century who wrote Conan
in a variety of short stories.  Incidentally he was also a friend and colleague
(via the mail) with H P Lovecraft; and modeled his concept for Cimmeria
(Conan’s home land) after some patches of Texas he’d travelled through.

Tagged with: old school What If Week

Previous: The Single Issue Adventure: Preview Show
Next: What If The Alien Costume Had Possessed Spider-Man?