Free songs
Don't Miss These Posts
Home / Reviews / What if Iron Man had REALLY been a Traitor, Really?

What if Iron Man had REALLY been a Traitor, Really?

The first full week in September is “What If Week.”  The Writer’s Blok is reading and offering thoughts and opinions on some of these gems of the Marvel Universe.  The What If stories are meant to examine what would happen if things went differently than it did canonically in the Marvel Universe.  The subject matter ranges from mundane to grandiose.  When you read a What If comic, it could be something as silly as “What if Wolverine Was a Girl?” or something as serious as “What If Charles Xavier Led The Brotherhood of Evil Mutants?”  You can see how the events in these books are interesting as they are isolated and free from the shackles of continuity.  Today’s offering is from Hal and it is “What If Iron Man Had Been A Traitor?”

What if Iron Man had REALLY been a Traitor, Really?

What if I didn’t welcome you back to Comical Musings?  What if I stared at you for an awkwardly long stretch of time, with a judgmental look on my face, and just typed a string of periods ……………………. then I would be a jerk.  But I am not a jerk; I am Hal, brother of Scott, and member of the Writer’s Blok.  We observe the vast universe of comics and report their strengths and weaknesses back to you, in hopes that it will ignite your enthusiasm for illustrated stories and allow you to focus your energies where they will be most effective.  But there are stories outside of the mainstream continuity, stories which diverge from canonical comic tradition at the whim of the author (or whenever a franchise needs to make some extra bucks.)  I am here to tell you of such a story, one which disappointingly addresses the question:  What if Iron Man had been a Traitor?
I admit that my lack of enjoyment in this comic was initially my own fault, because I misread the title.  I thought it was “What if Iron Man had been a Tailor?”  Indeed, what if he made actual suits?  Could his technological acumen be applied to revolutionize men’s fashion?  The mind boggles.  Alas, this comic turned out to be a poorly executed attempt to involve Tony Stark in some super villainous espionage.

Ironically, given the implied spy theme, the cover was an appropriate example of misdirection and obfuscation (right).  It clearly shows Iron Man’s helmet with a hammer and sickle emblazoned on the forehead.    This was a complete non sequitur because ***spoiler alert*** at no point in the story is Tony Stark in league with the USSR or communists in general.  The fact that the comic authors were willing to throw out such a blatant red herring on the cover leads me to suspect the whole “traitor” angle was played up in an effort to sell more comics during the last days of the Cold War era.  The comic would have more accurately been titled “What if Iron Man matched wits with Mr. Fantastic,” but that wouldn’t give adolescent fan-boys and James Bond fans false hopes of sexy spy drama.
So anyway, Tony Stark’s plans for iron-clad liberation and vengeance are thwarted before he can power up his first suit.  He is delivered into the ambiguously Asian hands of the nefarious Chen Lu.  Chen implants Tony with a communicator and a device that allows him to slowly torture Tony to death at will.  He also implies he has means to monitor everything Tony does.  Tony is eventually released to return to America and resume his life as the head of Stark Industries, but he lives under the constant threat that he will be forced to carry out orders from Chen Lu, or suffer a painful death. 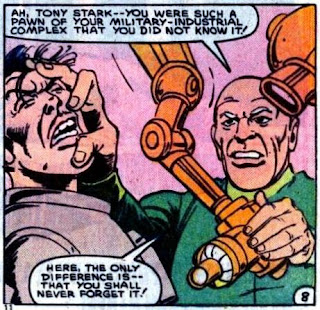 What would a criminal mastermind do with such power?  Redirect funds from Stark Industries?  Amass an arsenal of super weapons capable of incapacitating the rest of the world’s military forces?  No.  He lets Tony do his thing, become Iron Man, and engage in some super heroics.  The only traitorous acts that Tony is compelled to engage in are divulging that Nick Fury will be the first acting director of S.H.I.E.L.D. and then attempting to murder Mr. Fantastic.  It turns out that Chen Lu is working for HYDRA and when they attempt to assassinate Nick Fury, people begin to be suspicious of Tony, since he is one of the very few who knew about Mr. Fury’s impending promotion.  But it’s not until Reed Richards collects some evidence that Tony is being influenced by outside forces that Chen Lu decides Mr. Fantastic has to go.
So, Iron Man launches an assault on the Baxter Building while the other three members of the Fantastic Four are out at “the shows.”  This is the climax of the story, and one would hope this grudge-match of super-powered intellectuals would justify all of the silliness leading up to it.  Unfortunately, Tony isn’t really trying.  He’s already initiated a plan to free himself from the clutches of Chen Lu, and he throws the fight once Mr. Fantastic realizes what’s going on.
I was disappointed that it didn’t address what might have happened if Tony Stark had really been a communist.  With his intelligence could he have used Stark Industries to cripple America’s military-industrial complex?  Maybe he wouldn’t need to, if he could have built up Stark Industries’ financial momentum and used it to tank America’s economy.  Or perhaps he could have bought enough political influence and won enough public favor to slowly shift the nation’s political leanings.  What if the Avenger’s had become a covert communist organization?  Would they redistribute the justice?  What would Captain America do?
I found the most value in this comic postulating what the long term ramifications would be.  At the conclusion of this story the Avengers had not assembled and Tony was too injured to continue being the invincible Iron Man.  In fact, Tony never advanced the suit beyond the big, grey, clunky prototype.  How would this have affected the modern day Marvel Universe?  It would have had a major impact on the events of Marvel’s Civil War cross-over event.  And you can be certain that the block-buster movie from two summers ago would not have been made.
So, at least this comic got me thinking, which ultimately is the purpose of these flights of comic book fancy.  And, I was amused by the ridiculousness of the ending.  Reed Richards tries to comfort Nick Fury by telling him that the Iron Man suit will be used to serve a greater purpose… they packed it full of explosives and launched it at Chen Lu’s hideout.  The greatest piece of personal combat equipment is used as an anthropomorphic homing missile to blow-up a bad guy. 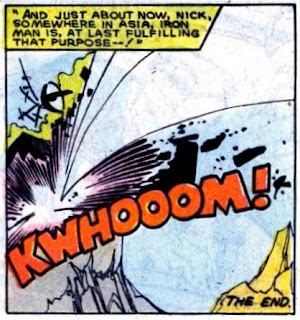 Until next time, watch out for HYDRA and keep asking “What if…”

Tagged with: dumb iron man old school What If Week

Previous: What If The Impossible Man Obtained The Infinity Gauntlet
Next: The Single Issue Adventure: Preview Show