Free songs
Don't Miss These Posts
Home / Reviews / What If The Alien Costume Had Possessed Spider-Man?

What If The Alien Costume Had Possessed Spider-Man?

The first full week in September is “What If Week.”  The Writer’s Blok is reading and offering thoughts and opinions on some of these gems of the Marvel Universe.  The What If stories are meant to examine what would happen if things went differently than it did canonically in the Marvel Universe.  The subject matter ranges from mundane to grandiose.  When you read a What If comic, it could be something as silly as “What if Wolverine Was a Girl?” or something as serious as “What If Charles Xavier Led The Brotherhood of Evil Mutants?”  You can see how the events in these books are interesting as they are isolated and free from the shackles of continuity.  Today’s offering is from The Black Ness Monster and deals with a very hot Marvel property doing some very awkward things, shadowed only by silly responses from the surrounding characters.  That’s right, it is “What If The Alien Costume Had Possessed Spider-Man?”

What If the Alien Costume Had Possessed Spider-Man?

In the original continuity the alien suit did attach itself to Spidey, but due to an act of daring heroism, Peter Parker is able to rid himself of the virus, utilizing the sonic power of a bell tower to scare the suit away before it could “form a permanent bond” with the our hero. The suit, of course, finds Eddie Brock, and thus Venom is born. And, if we are consulting the movie universe, the suit transforms Peter Parker into a member of the emo-punk band, My Chemical Romance. Either way, Spidey is able to pass his symbiote suit burden onto to Brock, and everything returns to normal, well, normal relative to the Marvel universe that is.

BUT! What if it possessed him forever … or just a little bit longer?

The issue starts with a brief reminder of the “real” continuity, minus the movie plotlines, before diving into the “What If …” scenario. Basically, in both the alternate and regular timelines, Spiderman, after acquiring his new, sentient costume, is feeling fatigued because that same costume has been keeping him awake all night to fulfill its need for excitement (I assume that means fighting crime, but we’re never told. Anybody know what excites an alien costume?). Wishing to solve his fatigue issues, Spiderman visits the Fantastic Four—who I suppose are accredited sleep and alien costume specialists; only, in the alternate universe, they aren’t at home when he first visits. To Doctor Connors, aka The Lizard, he goes instead! This is where the primary conflict arises, our Butterfly Effect. Since Parker as unable to reach the Fantastic Four on his first visit, the suit has already begun to bond with him when he finally does get a hold of the super team.

So there we have it … the symbiotic suit bonds with Spiderman, and he roams the city, terrorizing it and making Reed Richards look foolish as he fails to save him. All the while, Bruce Banner’s unfortunate descent into a permanent Hulk state is constantly referred to by the other, non-symbiote possessed characters. Those references to Banner work on a thematic level as they parallel what is happening to Spiderman because he, too, seems to have permanently become a monster, but beyond that, the references eventually become relevant to the plot when the suit needs a new and stronger host. If you guessed that its new host would be the Hulk, then give yourself a pat on the back. 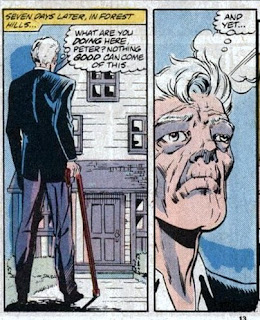 Once the suit abandons Parker for Banner, we see that the it has drained him off all his strength and has turned Peter Parker, a hero whose prominence resides in part to his youth in comparison to the other Marvel heroes, into an old man. Peter, following a rather sad encounter with Aunt May, dies of old age, which I suppose would have been a more powerful moment if Symbiote Hulk wasn’t at large still. Instead, it just kind of happens. One moment he’s in a lab, trying to find a way to kill alien-suit-possessed-Hulk, and in the next few panels, the Avengers are lowering his casket. I must say that it’s a rather odd moment, to see a character whose always been seen as the punk kid of the Marvel universe die as an old guy, presumably with back problems and erectile dysfunction … but that last part is just an inference.

The rest of the issue is dedicated to Reed Richard’s plan to kill the symbiote suit without harming Bruce Banner. One of the comic’s main concerns is whether it’s ethical to kill the host if its virus has made it into some kind of monster a la an issue that’s pretty common for Hulk storylines. Mr. Fantastic thinks not and spends the entire issue pontificating ways to kill the alien costume but keep Parker and then Banner and even the suit, itself, alive. Meanwhile, the Black Cat, who had a romantic attachment to our now dead hero, believes that Richards’ attempts to peacefully destroy the suit endangers the world and that he should just let Banner die if needed, but Richards is above that and invents a gun that, by some stroke of magic science luck, should stop the suit but leave its host unscathed. I guess they don’t call him Mr. Fantastic for nothing … I apologize for that joke.

Eventually, as any good virus should, the suit needs a new host, having drained The Hulk out of his strength too, but who’s stronger than the Hulk? Surely, this suit is looking to upgrade. Well, it does courtesy of Thor, allowing Reed Richards to deliver the oh so ironic line, “Even an immortal can die, given the right circumstances.” Then, Symbiote Suit Thor, with its newfound power, destroys and conquers the entire world.

Okay … not quite. For a comic that finds no problem with letting Spiderman die, rather tragically, receiving monthly Social Security checks, it isn’t quite as comfortable with a completely devastating conclusion. Not to mention, we still have the Black Cat plotline to resolve. It turns out, while Richards was trying to benevolently rid the world of the symbiote suite, Black Cat took a different approach in letting the Kingpin of Crime, who is surprisingly compassionate in his brief appearance, fund her magic-science-suit-killing-gun project. In the end, Black Bolt arrives and serves as Thor’s Bell Tower, freeing him from the suit. Then, from the wonderful world of Plot Convenience, Black Cat reappears and shoots the alien suit before Richards can imprison it, having sold her soul to the Kingpin in order to prove her point that Richards shouldn’t be such a wuss all the time. Duly noted.

The final panel shows the Black Cat walking through a dark cave as The Watcher pontificates on how her employment for The Kingpin will be worth the lesson in morality she dealt Mr. Fantastic. It’s a rather dark turn of events, not My Chemical Romance Peter Parker dark, but greek tragedy dark. Yes, the suit has been defeated but at what cost? Now, I, for one, don’t typically look to Marvel to pose existential questions. I save those for trendy, indie comics and also Aquaman, but this one seems to be striving for some sort of profundity with that last panel. And it may have earned it. I mean … in a completely goofy kind of way. Must I mention that Mr. Fantastic line again?

Previous: What If Conan The Barbarian Were Stranded In The 20th Century
Next: The Single Issue Adventure: Week 1, Issue 1