What If The Impossible Man Obtained The Infinity Gauntlet

The first full week in September is “What If Week.”  The Writer’s Blok is reading and offering thoughts and opinions on some of these gems of the Marvel Universe.  The What If stories are meant to examine what would happen if things went differently than it did canonically in the Marvel Universe.  The subject matter ranges from mundane to grandiose.  When you read a What If comic, it could be something as silly as “What if Wolverine Was a Girl?” or something as serious as “What If Charles Xavier Led The Brotherhood of Evil Mutants?”  You can see how the events in these books are interesting as they are isolated and free from the shackles of continuity.  Today’s offering is from myself, Scott Deaux and it is “What If The Impossible Man Obtained The Infinity Gauntlet”

The Marvel Universe is filled with characters both big and small.  There are street level heroes that beat up muggers and break up drug smuggling rings like Daredevil.  There are medium level heroes like Iron Man, who fight super villains in conflicts with an impact on the world.  Finally, there are cosmic level heroes.  Cosmic level heroes fight celestial beings and ancient god-like powers.  They are typically overwhelming in their vast array of powers and bother very little with affairs on Earth as there are many more planets at stake.  Although space is a giant area to war in, it seems that these titans often go un-noticed.
One Cosmic power that has mingled a great deal with Earthlings over time is The Silver Surfer.  The Silver Surfer has been the subject of multiple comic book series.  The Surfer series’ downfalls are often that they have been more concerned with how “cool” he looks as opposed to telling a well-rounded story.  Cosmic characters are created to fit whatever needs the writers have and therefore this “pantheon” of gods is almost laughable.  In recent years, brilliant creators like Abnett and Lanning have been leading cosmic characters to a new-found popularity with their Guardians of The Galaxy series, but these poor guys have had a tough run.  Part of the reason that Guardians of The Galaxy works is that it’s mostly just picking up the pieces of previously terrible series and arranging and re-vamping them into greatness.  The way that these characters have become popular again is nothing short of alchemy.  Abnett and Lanning are literally turning lead into gold.  All things considered, the most memorable Cosmic characters ever are Galactus and The Silver Surfer, but the star of our What If tale is one rarely referenced.  The Impossible Man.

The Impossible Man is an alien from the planet Poppup.  On Poppup, although the inhabitants had shape-shifting abilities, all of the people shared a collective consciousness and were boring.  All except, The Impossible Man who was a wealth of pop culture references and low brow humor.  The Poppupians were all jealous and miserable in their own existences, so The Impossible Man led Galactus (he does this kind of thing alot) to devour Poppup.  This left The Impossible Man alone and sad that his planet died, but freed up to bother everyone and that is where our story begins.
The great battle between Captain America and Thanos, titan of Death (yeah, that’s fair…what were they thinking back then?) is raging on a distant planet in space.  As Thanos pulls back to end Steve Rogers’ existence, The Silver Surfer flies in and instantly grabs the Infinity Gauntlet off of Thanos’ hand and seems to be home free.  Thanos summons a blast that knocks the legendary gauntlet into the air.  Right as it is about to land safely in the hand of Thanos, we get our What If moment.  The Impossible Man reaches out of nowhere and catches it instead.  With Thanos defeated, you would think that the celestial beings would be happy, but it is not so.  They foresee the damages that a loose cannon like The Impossible Man could inflict with such immaturity.  It’s like giving a loaded weapon to  a child.  One can only guess what will happen.
The Impossible Man proceeds to snatch The Silver Surfer right out of space and run away.  With his first act of omnipotence, The Impossible Man re-creates The Silver Surfer’s lost home world of Zenn-La.  The Silver Surfer is so over-joyed that he settles in with his re-created wife and sets about returning to normalcy.  Life is peaceful and we get a look at how Norrin Rad lived before he sacrificed himself to be The Silver Surfer.  The sweet time is short, however, as Galactus communicates with Norrin Rad and tells him that he is going to be killed.  The Silver Surfer is immersed in the power cosmic again and rides forth to save his previous master.
We end up in an awkward scene with The Impossible Man about to kill an imprisoned Galactus.  This cannot occur as it would upset the balance in the universe.  The Silver Surfer basically talks the Poppupian out of it and convinces him instead, to rebuild Poppup and give all of the denizens the ability to be annoying too (free will).  The only hitch is that to do this they need raw materials from another planet.  Galactus recommends that they sacrifice Zenn-La as it is not the real planet, but a re-creation.  The Silver Surfer does the right thing and sacrifices his planet to remove the infinity gems from The Impossible Man.  They are given back to the celestial beings that they belonged to and everyone lives happily ever after…except The Silver Surfer…as usual.
This synopsis does not do justice to how dumb and mostly pointless this comic is.  The fun thing about What If comics is that they are supposed to drastically alter the world of the characters involved.  This does nothing except bring Poppup back and kill The Silver Surfer’s family again.  All in all, nothing really interesting happened except some dumb guy got unimaginable power and did very little with it in the cosmic realm of Marvel that most people never know or care about.  The Silver Surfer had to watch his people die again, but the biggest travesty of What If week is that I pulled such a cruddy What If comic. 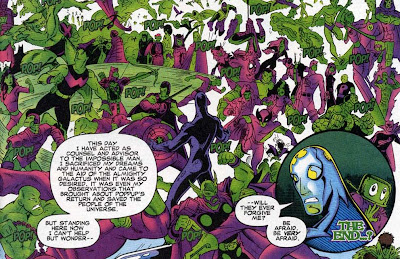 Tagged with: dumb Impossible Man marvel What If Week

Previous: Sometimes, Stuff Gets Annihilated When It’s In Space
Next: What if Iron Man had REALLY been a Traitor, Really?