Free songs
Don't Miss These Posts
Home / Reviews / What In The World Is A Ghost Box?

What In The World Is A Ghost Box?

We thank you for bringing your eyes to Comical-Musings on this fine day.  We hope that you will leave satisfied and then bookmark us or add us to your RSS feed.  We love that.  Anyways, I have been trying to spread out my interests/what I read so that I can continue to entertain.  For today’s review, I was planning on not liking Astonishing X-Men: Ghost Box and having a bad review to balance out my good ones.  There were many things working against this book.  I don’t know if I am eternally optimistic or if my brief “Bone vacation” left a good taste in my mouth, but I found some redeeming things in Ghost Box.  I’m just not sure if it is enough for me to like it. 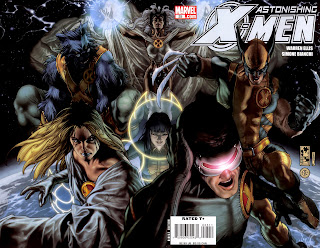 Astonishing X-Men numbers 1-24 was created by the superstar creative team of Joss Whedon (Buffy The Vampire Slayer) and John Cassaday (Planetary).  It was critically acclaimed, it brought back dead characters, and it re-defined the X-men in the 2000’s.  The way that Whedon writes each individual character is dead-on.  I am reminded of the scene where post-Jean Cyclops wakes up in bed with new love Emma Frost.  Cyclops finds Wolverine perched on the end of his bed as Wolverine says:

It’s these personal touches and quick wit that made Whedon’s twenty four issue run on Astonishing X-Men “game-changing.”  It is one of my favorite depictions of comic book characters in the Marvel Universe.  So, after twenty four issues, the question became “What will happen when the creative team is totally different?  Will the characters endure?”  In 2008, we got our answer when Warren Ellis (the subject of all blogs this week) took over the fiercely popular title with Bianchi on art.  Their first story arc is called “The Ghost Box” and it is the subject of our review today.

Ghost Box did some things with skill and others fell flat.  The plot is loosely that inter-dimensional mutants want to come invade Earth using the Ghost Box as a portal and crazy Forge is trying to stop them by making his own post M-Day (House of M) mutants.  Beast, Armor, Cyclops, Wolverine, Emma Frost, and new team addition Storm of Wakanda all fly in a super jet from their new San Francisco digs to address the problems in an alien spaceship junkyard in Indonesia and ultimately to confront Forge at Wundagore Mountain.  That sounds about right for the famed creative mind of Ellis.  I felt like this plot had cool elements to it, but ultimately fell a little flat.  The art is very good in the comic book and Bianchi earned all of his money.  From close up face shots to large scale work, Bianchi’s “painted” art impresses.  None so much as the Indonesian spaceship junkyard.  The Indonesian spaceship junkyard, a place where nations dump their alien refuse that they don’t know what to do with or don’t want to deal with, was awesome. 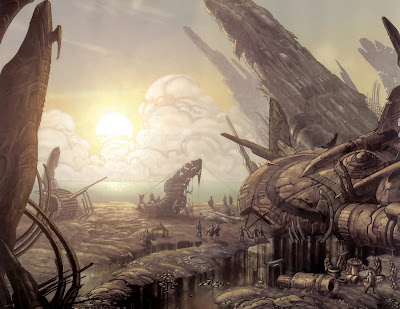 The idea that poor Indonesian people salvaged parts off of alien spaceships to make ends meet while exposing themselves to various radiation made sense to me.  I also enjoyed Cyclops and Storm’s interactions with their teammates.  Cyclops came across as a strong leader in Ghost Box and I can’t remember the last time that happened.  Storm’s boredom at being Black Panther’s queen was funny and believable as she used to be a Moroccan street urchin.  These were all good parts, but there were some smudges.

Astonishing X-Men: Ghost Box is about these heroes growing up and finding out who they are.  If you ever forget this, don’t fear because they will remind you on the next page.  This book REALLY wants to be taken seriously, almost to a fault.  That was annoying.  I also didn’t like how convoluted the plot got by the end.  It was a big pill to swallow.  Also, I am glad that Beast and Agent Brand are into each other, but the overly-sexualized dialogue between them felt forced.  These are nitpicks, but I was taken out of the story numerous times because it felt like a whining child, begging me for attention.

In the end, Astonishing X-Men: Ghost Box was ok (think C or C+).  The super heroics could have used a little more explaining in some areas and a little less in others (their jet plane spaceship thing that San Francisco gave them is ridiculous).  It’s kind of cool, but I didn’t feel super-entertained or inclined to share with others (why did I write this blog?).  The plot was imaginative, but not palpable enough to keep my full attention.  If you like the X-Men, you will probably like this.  If you like Joss Whedon’s Astonishing X-Men, you may be let down.  It’s weird that that is exactly what this feels like, a trade down.  Don’t get me wrong, Ellis is a good writer, but as someone who is a self-proclaimed hater of superheroes, I question his motivation and investment in this story.  If you are into inter-dimensional stuff and like comic books that talk to you like you are a jerk-face 18 year old, you can purchase this comic in hardcover for $18.59 on Instocktrades.com. 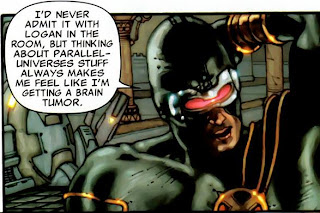 2011-09-16
Scott Deaux
Previous: Comical-Musings’ Position On The Reboot of Amanda Waller
Next: Batman Celebrates Resurrect Like a Pirate Day