Free songs
Don't Miss These Posts
Home / Reviews / Why You Like Comics, and Why You Will Like the Flaming Carrot

As many of you may have read, Comical-Musings is now being taken over by the authorship group of The Writer’s Blok.  These 5 like-minded individuals will be partnering with me, Scott Deaux as the editor-in-chief to bring you larger quantities of content, greater quality content, and different viewpoints that allow the blog to become something greater than just my singular thoughts and knowledge about things.  We are happy to lead with our first article from The Writer’s Blok which was authored by Hal.  Hal is an excellent friend/brother with an affinity for DC Comics and higher thinking.  It is widely believed, from previously penned compositions, that he has a way with words that captivates the mind.  We are happy to have him in the Writer’s Blok and are sure that you will be glad that he’s here too.
………..I love thunder storms………..what is…Oh, hello.  I didn’t hear the page load.  Welcome [back?] to Comical-Musings; where the sharpest minds devote themselves to the most fruitless of endeavors.  We appreciate your patronage.  You may have noticed that I’m not Scott.  Well done.  I’m his brother Hal.  Scott tapped me to become a regularly featured writer for The Writer’s Blok, because Grant Morrison was busy tending his rock garden.  Scott thought you might appreciate a slightly different perspective of the comic universe, since he and I have slightly different tastes.  But I’m sure you’ll pick up on that…
So, why do you like to read stories somewhat predigested and packed neatly (or not so neatly) into rectangular panels?  People cite a variety of reasons that they read comics, but if you are anything like me, the reasons are simple.  We like to glimpse into the imaginations of other creative minds.  Sure, captivating plots, social commentary, artwork… but really, it all comes down to unusual individuals with fantastic abilities and the convoluted situations in which they find themselves.  Throw in some charisma, some jokes, some violent justice and I’m sold.   That’s why the Flaming Carrot is my all-time favorite comic series.

The Flaming Carrot was created by Bob Burden and originally published from 1984 to 1993.  Bob Burden is a surrealist artist who is also responsible for the Mystery Men, who were captured cinematically by the underrated 1999 Ben Stiller movie.  He also preemptively trademarked the name “Spongeboy,” causing the creators of a certain square-trousered pineapple dweller to rename their character after him.  Mr. Burden is not related to the lead singer of the band The Animals. 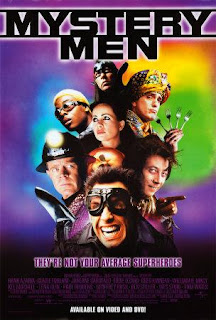 His interest in surrealism comes through in his comics giving them a dream-like quality.  Often, they seem like a stream of consciousness exercise, where random encounters suddenly arise and pass by without impact.  In this environment, it seems like nearly anything can happen, and yet his characters remain grounded and relatable.  The phantasmagorical nature of his stories is what draws me in.
I could try to describe the Flaming Carrot himself, but a single blog post wouldn’t do him justice.  Nor would it do as comprehensive a job as a brief illustrated introduction that used to be freely available on the web here:  http://www.flamingcarrot.com/. (Why post the address of a site that doesn’t exist any more? Because it’s what the Flaming Carrot would do, if he wrote blogs.)

Until that url is restored, I will gladly repurpose countless electrons briefly describing this indescribable paragon of chicanery.  Basically, he is a simple-minded hero who wears a giant carrot mask which emits flames out the top.  He has no super-powers, but he does carry a gun.  And he seems to have incredible luck.  His ability to adapt to unreal situations and his single-minded devotion to fight for good not only make him a local celebrity in his home-town, Iron City, but also make him a compelling character to follow as he embarks on zany adventures.  He has staved off three alien invasions, fought an army of cloned Hitler feet, and inspired otherwise well-adjusted individuals to try to emulate his costume.
While the Carrot’s mentality seems child-like at times, his comics aren’t completely kid-friendly.  He drinks, occasionally womanizes, and defeats his foes with lethal force, when necessary.  Kids probably wouldn’t understand the nuance of his stories anyway, (not that anyone really can) and the initial run of Flaming Carrot comics were all in black and white which probably wouldn’t hold the interest of the Facebook generation.  But if you are interested in a bizarre exploration of what really makes a hero or you just want to know how to defeat a flying, zombified dog, this comic is for you.  Compilations of his stories are available in trade paperbacks from most online book vendors.
I’ll now return you to your regularly scheduled internet activity, while I refill my tea and contemplate time-travel.  Shalom.
~ Hal ~
Flaming Carrot indie Writer's Blok 2011-07-08
Hal

Previous: Robert Kirkman Gets Talksploded!
Next: The Wolves In The Walls