Second time’s a charm…or so they say.  Welcome to Comical-Musings and today instead of typing words, it seems that today, I will be eating them.  Although I love Jim McCann and am reading his critically acclaimed and visually stunning graphic novel, The Return of The Dapper Men with bated breath, I wasn’t too keen on his Hawkeye and Mockingbird series.  The review I wrote was in no way meant to be rude or critical, I just couldn’t get down with the spy stuff.  Since then, I have listened (and shared with you) many interviews with him and have found out some different things about him and some of the deep thinking about the characters and their situations.  I don’t know if it was getting to know the author’s personality more or what, but after reading his follow up tale, “Widowmaker,” it seems that if you shove a square peg into a round hole long enough, it will fit. 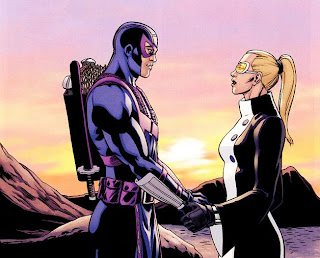 I really liked Widowmaker.  Hawkeye and Mockingbird felt like an action movie and this feels like it’s big budget, Michael Bay directed sequel, starring Nick Cage (of course).  The spy action is thick and there is some snowmobile fights and long lost characters showing up to ruin everything and secret assassinations and gadgets.  In a word, it’s “fun.”  Maybe the fact that people’s moms aren’t getting shot and ancient ghosts aren’t raping people (not kidding) makes this book a little more “fun” or at least less of a downer.  Don’t mistake me, lots of people die in relatively gory action in this book, but a lot of times, they are nameless goons both good and bad.  This “fun” aspect came across easily and made Widowmaker much easier to read than Hawkeye and Mockingbird. 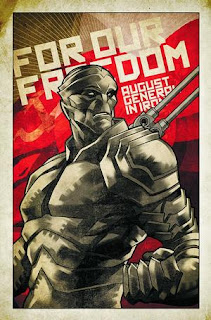 Another thing that I really liked about Widowmaker was the Russian Avengers.  Call me a sucker, but I just love to see “different country” takes on that which we consider canonical.  In the 52 books from DC Comics, it was great to see The Great Ten, Chinese superheroes with awkward names, and adopt them as legitimate superheroes.  I’m reminded of August General in Iron, Accomplished Perfect Physician, and Immortal Man-in-Darkness.  Seriously read about how crazy different they do superheroes than we do here http://en.wikipedia.org/wiki/Great_Ten.  The Supreme Soviets are made up of Perun: the Russian god of thunder, Sputnik: jams electrical equipment, a beefed up Crimson Dynamo, and a woman who has illusion control named Fantasma.  The fights are pretty epic and at one point, I wasn’t sure if our protagonists would survive.  These guys ended up being a decent match for Hawkeye, Mockingbird, and Black Widow.
Did I mention Black Widow was in Widowmaker?  Well she is. I loved the way that she was written.  I am not sure if Jim McCann’s sexual orientation allows him to write women characters better, but it is something.  I have always seen Black Widow as a super bad motha’ spy who is cocky and arrogant, but Jim’s is slightly different.  I mean she is still those things, but Jim uses back story to reveal a girl who is a product of an overzealous government.  I really was able to see her as more of a victim by the end of Widowmaker.  It was an interesting take.  Not to mention that she is a former lover of Hawkeye and so their quipping and the extra level it adds to Clint (Hawkeye) and Bobbi’s (Mockingbird) relationship.
If there was one complaint that I would level against Widowmaker it is the switcheroo that they pulled every other issue.  Jim McCann and David Lopez are the Hawkeye and Mockingbird creative team and David Lopez’ art is just as clean as it was previously…looks beautiful.  I wasn’t so thrilled by the offerings from Black Widow’s creative team in issues 2 and 4.  Manuel Garcia’s art style is a little dirtier and when placed up against Lopez’ crisp offerings, looks a little lazy.  Not that I could pencil comics or that this should dissuade you from reading Widowmaker, but it is my one nitpick. 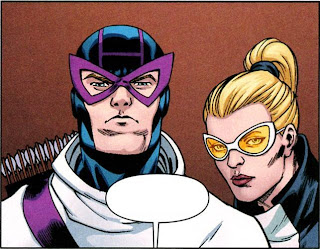 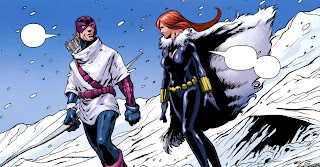 The threat that is faced in the book is serious and the action ramps up to meet it.  The book is violent, but has heart.  It is fast-paced, but not too fast.  It is involved, but not narcissistic.  It takes you deep, but doesn’t drown you.  This comic was well done and it makes me question whether my take on Hawkeye and Mockingbird was right.  Jim McCann is a great writer and this comic book was created gracefully with great understanding of the characters.  I can’t think of a single brilliant Hawkeye moment aside from various cool trick arrows, but that didn’t hurt the reading experience.  I was strapped to my seat the whole time.